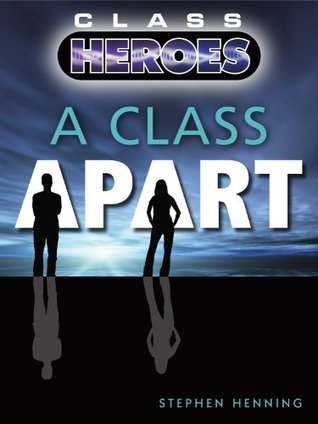 A coach has just been blown up in an apparent terrorist attack in London leaving dozens of school children wounded. They’re rushed to a hospital for medical care while the media swarms for a glimpse of the aftermath. The police quickly get involved to try and calm everyone’s fears and catch the perpetrator. What no one realizes is that this is much more than a blind act of violence and the school children were not random victims, but targets of a well-executed plan. The hospital quickly becomes a house of terror when the kids realize that they’ve gained super powers and the staff is turned into puppets acting out one child’s nightmares. Two of the kids, James and Sam, take it upon themselves to solve the mystery and save everyone from a living nightmare.

A Class Apart certainly doesn’t unfold like your standard super hero novel. At first I thought this was going to wind down to a horror novel as more of the creepy elements of the hospital surfaced early on in the novel, but then it melded with some classic super hero elements of discovery and limitations. Most of the book takes place in a hospital, which was meticulously detailed in the book and lent to its overall creepy vibe later in the novel. The main characters, James and Sam, are siblings and are well developed through the story along with plenty of the other characters that are thrown into the mix. But by far the best character is Lolly; her overall mysterious nature was well characterized and she’s one personality that I definitely want to learn more about. It seemed that her and her ‘father’ were the ones pulling the strings, but operating on the sideline of events. But while the characters and scenes were well done what really brought this novel down a bit was the dialogue and overall character interactions. The dialogue seemed very generic and forced in some cases. For example there was one line of dialogue early in the novel when the children were calling each other names, “I hope you die looking at a McDonalds.” I’m not sure what this means, maybe it means something in Britain, but to me it just sounds like an odd thing to wish on your enemy, even for kids. Or another example, “You pretend that you think you are not attractive,” continued Philip Randerson, “when, in reality, you know that you are attractive. But by acting like you believe you are not, you end up gathering more attention.” I use this because it’s an example of a lot of sentences in this book that suffer from a lack of contractions and clunky prose. But overlooking the awkward flow of speech A Class Apart has a fantastic story of sibling love and the burdens of power at its core. It stands on its own as a novel, but is a great setup for the series.

Learn more about the Class Heros series at http://www.classheroes.com/