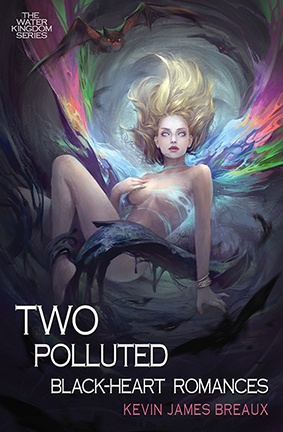 Two Polluted Black-Heart Romances follows the lives of a vampire, fairy and mummy who are caught up in a world of chaos as they try to escape the wrath of the wraiths- a paranormal group that is bent on revenge on the unlikely trio. Air spirits, talking cats and the cursed undead will all play a part in this fantasy novel as they bounce between gaining record deals and fighting supernatural monsters.   Meanwhile, another version of chaos is threatening to destroy their world and they must find a way to work together to fight an evil like no other.

Two Polluted Black-Heart Romances, written by Kevin James Breaux, is an action packed fantasy novel that collides the modern world with magical creatures and supernatural beings. Each mystical being (and human!) are trying to find their place as they revel in the aftermath of destroying evil.

The story flips between various perspectives of the characters, keeping us up to date with what is happening in the story progression. The different characters and their personalities mean that the mood of the story can change drastically, one moment you may be watching through the eyes of Sabrina as she seduces old flames and the next moment you are underground with a human and undead as she passionately tries to protect her love.

One of the most interesting characters was Cade. Cade has unique senses and an ability to bear fangs to persuade a situation. Being a vampire has its perks however Cade finds himself torn between the people of his past and present. His character was one of my favourites as the reader is treated to his heroic rescues and violent deaths. I appreciate Breaux’s ability to paint a picture with his words and I found it easy to imagine the vampire devouring humans, lured by the innocence of puppy dogs.

The modern twist made the story feel relatable. In a matter of pages, you are transported from a mass murder of winged creatures to discussing Justin Timberlake in the recording studio. It actually also provided a bit of comic relief as in the midst of a tense scene, celebrities were named dropped like it was your everyday Hollywood scenario. It wasn’t just the name dropping that caught my attention though. Some of the plot eerily replicated scenarios that could happen in real life as the plot delved into sinkholes, pollution and the threat of terrorists.

One character I found to be confusing at times is Sabrina. Sabrina is a winged creature, descent from royalty. She is quick-tempered, passionate and at times childish. At times her character was frustrating and I found myself mentally wanting to tell her what to do! Her character eventually grew on me though as she soon begins to accept and acknowledge the affects her decisions have on her friends.

I would recommend this to anyone who enjoys a fantasy novel that twists into a modern day adventure. I look forward to reading the next installment and finding out what happens to each of the characters.