← The Nosferatu Chronicles: Origins
The Queen of Heaven → 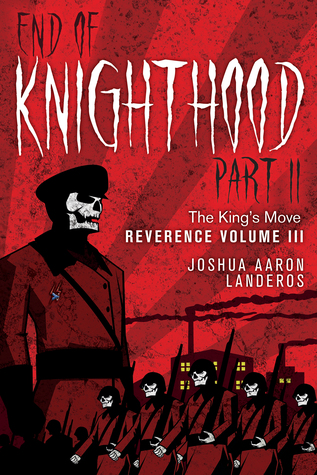 End of Knighthood Part II: The King’s Move keeps the action blazing forward! The second installment, by Joshua Landeros, follows rebel cyborg super soldiers and continues the story of William Marconi, who seeks vengeance from Chancellor Venloran. After finding out what latest weapon the Chancellor holds, rebel fighters Captain Halsey and Gabby, were lured into a trap and are at his mercy. This sets the stage for what the rebellion needs to do. Will, who started this rebellion, may get his chance to achieve his vengeance and end it, but the cost may be even too great for him to bear.

The King’s Move wastes no time in getting back into the thick of the action and picking up where we left off in the first. The action does not break and the events become more heinous as we reach the book’s climax and the tragic conclusion. Landeros continues to borrow the best from classic military sci-fi authors with short, clipped sentences and telling “only the facts” when denoting action and danger. His world building is subtle and should please any reader who pays attention to the craft of writing. With this second part in his series Landeros has escalated the conflict and moved the stakes to an even higher plane.

The characters remain, along with the action, some of the best parts of the novel. His rather wide cast of rebels and villains are all a thrill to read and fun to follow as they attempt to achieve their various goals. The book remains a blend of sci-fi/thriller that would keep any fan of those two genres satisfied. The dialogue shoots back and forth between the characters as fast as the bullets, keeping the pace quick and the readier on the edge of their seat. These are a welcome distraction from the brutal carnage that sometimes occurs.

The lack of description hurts this work at times, which it makes up for since with prose that has improved since the last installment. He continues to borrow heavily from screenwriting techniques, with consistent dialogue on almost every page, while providing only deep description of the action scenes. His fast pace style will suit casual readers as well as those used to thrillers and military sci-fi.

The King’s Move is an exciting bridge that keeps the reader entertained and swept away on the plight of these rebel cyborgs. Anyone who enjoys a military science fiction thriller will find their palates pleased with Landeros’ work and hungry for the third installment.

← The Nosferatu Chronicles: Origins
The Queen of Heaven →