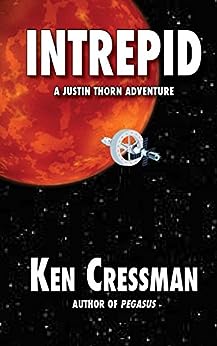 Ken Cressman’s book, Intrepid, is a futuristic adventure set mostly in space. We follow main character, Justin Thorn, and his engineer friend, Steven Wilson, as they take on a mission they never could have seen coming. Wars have broken out over race, religion, and even sports teams, dividing the United States. Martial Law has been declared. Military branches have dissolved, and the leftover scraps have been joined together to form the Military Defense Force. Justin, a former MDF pilot, has an anti-gravity capable ship named Pegasus pieced together from former military aircrafts, and the feds want it. Justin won’t let his ship leave without him. He volunteers to set out toward Mars. The mission is unclear. They will either fix faulty communication devices, rescue the nine people on the planet, or retrieve bodies. One of the nine is Justin’s ex and the love of his life, and all they know is there has been no communication between Mars and the Space Agency for months.

This is an edge-of-your-seat kind of book. Whatever can go wrong, does go wrong. A whole different set of obstacles is present during space travel than here on earth. Gravity, anti-gravity, air pressure and breathability, depleting food and fuel levels, meteor showers. It seems like every time things start going smoothly, something goes catastrophically wrong. Between Justin and Steven, they might as well have MacGyver on board though. They put their heads together to take on every problem that arises. The problems leave you woeful for the exhausted characters, but it keeps the excitement high. Risks are high, but so are rewards.

Justin is a loveable character. He is sort of a self-made man. He was a pilot with the military, but is now self-employed. He has taken advantage of the latest technology, and has built a ship equipped with anti-gravs (anti-gravity). He basically has formed a transport service, zooming goods around the globe. He does have space experience, and that comes into play when the Mars mission presents itself. He is also loyal. He doesn’t want to take the job if it means leaving Steven, his engineer and general know-it-all and problem-solver, behind. He also feels the need to be part of the team that goes to check on Kelsey, a member of the Mars research team who is also his former girlfriend and current love. Justin bravely puts his life on the line more than once for the good of the crew and the mission.

The book is packed with cutting-edge futuristic technology. Maia is also on board. Maia is an artificial intelligence computer system. Maia is ever-present and a pivotal tool when obstacles arise. Cressman does an excellent job of explaining the more technical parts of the book, including Maia. Technological advances are broken down where someone who is not scientifically or technically inclined can understand everything easily.

The element of the unknown also plays a big role in Intrepid. Space is vast and unimaginable without a million problems. The crew has no idea what they will find when they get to Mars. Will the research team all be dead? Will they find anything at all? Will there be a simple fix to their communication equipment? Will they walk into some sort of ambush? Will anyone make it back to Earth alive? The reader will find themselves questioning every next step as they follow the crew on their mission.

Ken Cressman makes everything so relatable and readable. It is technical at times, but the technology is effectively explained. I was all but biting my nails as the story progressed. I’d like to read more Cressman work.