← Why Are These Tragedies Relevant?
Destiny Revisited Book Trailer →

In Breaking Worlds we learn about the divide between Lisen and Korin and we witness their daughter’s determination to change the world. What were some driving ideals behind the characters relationships?

Once Rinli died in Protector of Thristas, I knew what had to happen. The death of a child can either bring the parents closer together or rip them apart. I decided to go the latter route and see if I could help them heal eventually. It was difficult to write because I love these characters, but it was necessary to show how two people so closely bound in life and love could respond so diversely to such a tragedy. Now for Rinli, resurrection was not kind. She’s 16 at the time of her death and harbors strong resentment toward the mother who bartered her life for peace. I asked myself how does the psyche of a person who dies and then lives again survive such a painful ordeal? Jon Snow in Game of Thrones remembers nothing past his murder when he’s revived. Jesus Christ reawakened in his tomb a glorified being, but of course he had godhood going for him. But what does resurrection do to a 16-year-old child with deep emotional wounds? And it became clear to me that the rift between Rinli and her mother was only going to widen despite Lisen’s previous efforts to protect her. Sad and tragic as all this was for these three characters, challenging as the work was for me, it was fun to write. Am I wicked for saying that? I doubt any author would feel differently.

This book has clearly been crafted with care and is full of emotion. What were some themes that were important for you to continue in this book, and what were some new ones you wanted to introduce?

The continuing theme of the consequences of decisions remained paramount in my storytelling. I find tales of redemption the most interesting of all, and there can be no redemption if there is no sin. I love breaking characters into pieces and watching how they reassemble themselves and the relationships they’ve broken in the process. In Breaking Worlds, I wanted to explore what it means to be the helpmate to a person with the potential for greatness. I delved into the parallels between Korin and Madlen in their roles as lovers/supporters for their beloveds, and Madlen’s unquestioning (or barely questioning) devotion to Rinli fascinated me. And beyond all of that were the variations of grief and the effect grief has on us as people. I found it both harder and easier to dig into the pain of grief as I wrote because I had just lost my best friend to cancer. Harder for the immediacy of what I’d just been through, but easier because it was so fresh. What it comes down to is what I say on my Facebook page. “I love combining characters with conflict and crisis and then watching as they suffer the consequences of their choices.”

This is the fifth book in the Lisen of Solsta series. Has the series grown beyond what you had originally imagined or are you still following a clearly defined path?

Well, the series has certainly grown. I never expected to write past Blooded, book 3 in the series. But as I’ve noted before, I grew curious about what would happen when “the bill came due.” In other words, what would happen when Lisen had to hand Rinli over to the Thristans in the desert as their “Mantar’s Child”? Then another question emerged after I finished Protector of Thristas (book 4). What would a world broken by Mantar’s Child look like? That led quite neatly into Breaking Worlds.

What can readers expect in the finale of the Lisen of Solsta series, book 6 Pushing Madness?

Breaking Worlds and Pushing Madness were written together. I didn’t know if I had enough material for two separate books, so I kept pushing forward with certain criteria set up for what length would be too much for one book and where I would split the book into two if that became necessary. In terms of the story, my intent is to clear the table, to answer all the questions–in short, to tie up all the lose threads and hopefully leave the reader satisfied while allowing the ending to be a bit messy. I’m not a fan of endings that are too neat. I prefer to be left, as a reader, with a few things to tidy up for myself, and that’s what I strive for in my endings. 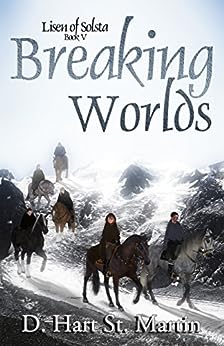 Left with the blood of a tragedy on their hands, Lisen and Korin can no longer face one another. Korin heads east towards the desert, while Lisen remains in Avaret with two children in need of comfort Lisen cannot provide. Never has she felt so alone. As war threatens on the horizon, two deserted people must somehow find their way back to life, to each other. Will Lisen and Korin reunite in time? Will the truth of the dead and the living be revealed?

Return to Garla and Thristas where love may not conquer all, but it can serve as an ally in the fight. Where all that seems well doesn’t necessarily end well. Where loyalty can be bought with a nudge. Where all the magic in the world may still fail you. Where, with Garla and Thristas on the edge of destruction, Book V of Lisen of Solsta’s saga drives the story closer to the inevitable conclusion to Lisen’s story.

← Why Are These Tragedies Relevant?
Destiny Revisited Book Trailer →