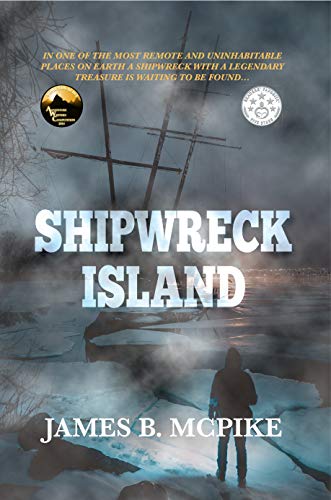 Shipwreck Island by James B. McPike is an adventure story with mystery and intrigue. Roy Berenger, an expert in salvage operations of shipwrecks, is approached by the great-great-granddaughter of one of the survivors of the wreck of the General Grant, a ship that was carrying a group of miners and the riches they’d unearthed in Australia. But the General Grant drifted off course, crashed into the cliffs on Auckland Island, and sank. Natalie Claiborne needs Berenger’s help to locate the lost ship and it’s treasure. Natalie’s ancestor, Winston Claiborne had kept a diary that described the event and the conditions the survivors endure while stranded on a bleak island, as they waited eighteen months for rescue. The diary also included a crude map of the island with an ‘X’ mark in the middle. Most of the survivors perished, and the shipwreck had never been found. There are tales of the island being cursed. Berenger’s instincts tell him from the start that he shouldn’t get involved with this particular shipwreck, but… he can’t resist the lure of adventure. Lots of treasure hunters have tried to find the ship, and many have died in the search. Can Berenger and Natalie succeed where so many others have failed?

The story begins with a prologue set in 1866 when the ship’s crew faced imminent disaster off the coast of New Zealand, which drew me into the story. People have been searching for the treasure for one hundred and fifty years since then, and I enjoyed reading the section about previous treasure hunters looking for the wreck, starting in 1868 and followed by numerous other expeditions in the intervening years. I liked the inclusion of this history, which gave additional depth to the story.

It was interesting to read about the different technologies used in underwater salvage to locate shipwrecks, but when the equipment malfunctions and a series of other strange occurrences happen on the island the search proves dangerous and deadly. Someone doesn’t want them to find General Grant’s treasure and sabotages their efforts. I felt that some of the villain’s actions were contrary to their motives. The villain wanted to use other people to locate the treasure for their own personal gain, but then tried to kill those people before they had a chance to solve the mystery of the missing ship. I would have used a bit more clarification on the characters motives to really flesh out, what I think are, intriguing characters.

There were a few issues with awkward sentence structure and repetition in this book as the same things were expressed more than once using different phrasing. This distracted from the flow of the story. And I felt that the chapter when Roy goes to dinner upon his arrival in Auckland doesn’t really add anything to the story and could have been eliminated.

I liked that the book included a map that showed the area of the different shipwrecks and their location in relation to each other. This allowed me to better visualize the setting of the story, which I found helpful. Overall, I found this to be an entertaining story that puts compelling characters in perilous situations set in exotic locations.