← The Queen’s Adventurer
The Emotion of Fear →

Reactive follows Lune who must compete in three deadly trials to escape the city and gain her freedom. What was the inspiration for the setup to this thrilling novel?

I’ve always been a huge Hunger Games fan, and after reading the books, I couldn’t get enough of the dystopian genre! I’m a competitive person myself, so the thought of contending in high-stakes trials to earn what you most desire fascinated me. Also, based off some of my personal life experiences and being a bit claustrophobic like Lune, living a trapped life behind walls was something I wanted to explore—how it could damage the psyche and make a person quite . . . reactive.

Lune is a strong and determined woman who remains focused throughout the book. What were some obstacles you felt were important to her character development?

I wanted circumstances leading up to the Trials event to throw a wrench in her plans, have obstacles expose the fears and weaknesses that she tried to hide, even from herself. Since this is a trilogy, her character development is far from over, but despite the many ways she has struggled thus far, above all else, she has remained resilient in the face of adversity.

How did you develop the Elite Trials while writing and what were some themes you wanted to explore in the trials?

For the most part, I took inspiration from real sporting events, ones that I always thought were quite dangerous: sword fighting, boxing, horse racing, hunting big game. None of these sports are won by team effort. You have to tough it alone. The purpose of the Trials as Lune knows it is to prove that you are worthy of a better future, so working together with another contender would be considered weak. I really enjoyed exploring the concept of strength versus weakness in this book.

This is book one in the Elite Trials series. Where will book two pickup and when will it be available?

Adaptive, book two, will pick up right where book one leaves off! I plan for it to release summer or fall of 2019. 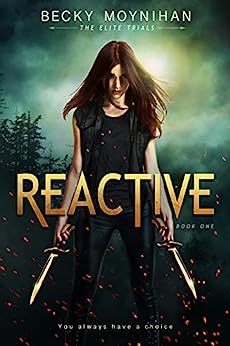 AN INESCAPABLE CITY. THREE DEADLY TRIALS. ONE WAY OUT.

For eleven years, Lune Tatum, adopted daughter
of the Supreme Elite, does as she’s told.
She doesn’t ask questions.
She trains for the Trials. She follows the rules.

And she wants out.

Her plan has always been to win the Elite Trials
and earn Title of Choice, her only chance at freedom.

But a boy from her past
shows up on her eighteenth birthday.
His presence threatens Lune’s carefully laid plans
and exposes memories she’s desperate to forget.
One thing is painfully clear: he can’t be trusted.
He has secrets. Big ones.
And they could ruin everything.

← The Queen’s Adventurer
The Emotion of Fear →