← Soul Dark: Chosen
Fragments of A Journey, A Fistful of Life →

The King of Halloween & Miss Firecracker Queen: A Daughter’s Tale of Family and Football 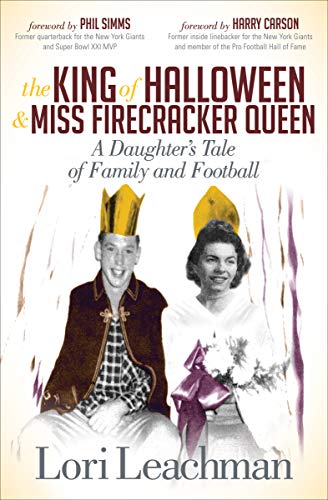 The King of Halloween and Miss Firecracker Queen, written by Lori Leachman is the story of American Football coach Lamar Leachman from the perspective of his daughter. It follows a coach’s journey from professional player to high school coach to National Football League coach. We see the impact this has on his wife and two daughters. It is a uniquely feminine glimpse into what was ultimately a man’s world – where winning was everything!

Leachman writes of how her father’s chosen profession had an impact on herself and the life of her family. One impact was the geographical impact, always moving to where the job opportunities lay. The family had to move numerous times and she documents the effect this had on the children, in particular. They had to constantly make new friends, and learn the social mores in each new community. The children’s closest friends were often the children of the other football coaches. She describes how they were tough kids, they were coaches’ kids.

Leachman provides an interesting view of Black Civil Rights and how views differed among places. Her view of mixed race friendships were simple; if she liked someone she would be their friend. That of course, contrasted with the views many adults at that time had. She describes briefly living in Cartersville and being confronted by “Blacks Only” signs at the theater and the confusion she felt when she realized African Americans weren’t allowed to swim in the pool. This must have been a bewildering time for a young girl who was immersed in the professional world of football – where African Americans were respected for their skill.

Although her father’s career may have had some negative impacts for her, as she gets older she realizes that her lifestyle had some benefits. Leachman recounts the day she realized her family had some money to spare – something a lot of families did not have.

Tragically the person impacted most by his career choice was the coach himself. Leachman describes how her father’s mental capacity began to decline, and how he was eventually diagnosed with Chronic Traumatic Encephalopathy attributed to injuries he received during his career.

This memoir is cleverly written, as it progresses through we see Leachman begin to understand her father’s talent as a coach, she recognizes his skill and determination and love for his wife and daughters. The only criticism of the book would be that on one occasion Leachman jumps back and forth between decades which interrupts the flow of the story.

This memoir is an interesting insight to the life of a professional coach, his dedication to the sport, and the impact and experiences for both him and his family.

← Soul Dark: Chosen
Fragments of A Journey, A Fistful of Life →