← The Aristocrat – Trailer
For the Love of Self → 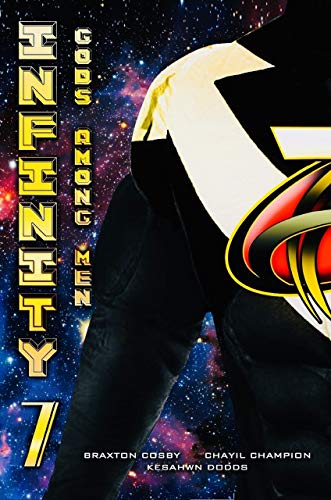 A superhero mashup from the talented minds of Cosby, Dodds, and Champion containing all your favorite characters from the authors own respected series. These three well-accomplished authors team up to produce an ambitious novel. At times this story works well and seamlessly provides a world where these superheroes can come together and fight yet falls short to bridge the gap between each story line and harness a collective voice among the numerous characters.

Infinity 7 begins with the rise of a dark power. As the growing threat draws closer to earth the Capes, Majesties and Solar Warriors band together to solve the mystery of their fearsome foe and hold their own against the escalating violence around them.

Those who have read Dodds, Champion, or Cosby’s previous novels will appreciate the crossover character interactions, powerups, fight scenes and the familiar personalities of main characters. I don’t discourage those who have not read all prior books about the Majesties, Capes and Solar Warriors. In fact, I’ve only read Cosby’s novels featuring the Capes but became increasingly curious about the origin story of Solar Warrior and the Majesties. Menzou, in particular, was a standout character in the latter half of the story.

It is safe to say when three separately established narratives come together an overload of characters is bound to happen. Trying to fit every character from every book into one story gave way after only a brief introduction for the main players. And then to add new characters made for an even muddier predicament. The portal jumper Tenan was one of my favorite superheroes, not so much for his abilities (that spot is held by Blurr), but for his evolution as a character. The concept of his being and power capabilities were truly fascinating and a new twist on the typical portal hopping powers. Tenan’s narrative stood out among the others for the creativity and consistency and I applaud the authors for integrating such an engaging plot within an already chaotic universe.

I love a good superhero, sci-fi, adventure series and this book has all the makings to be a good one. My wavering stance is for the lack of world building and character development which had me scratching my head in confusion more than once. Still, I imagine readers who read all former books from the authors’ will greatly enjoy the journey. And semi-new readers such as myself will soon be putting the adventures of the Majesties, Capes and Solar Warriors on their future reading list.

← The Aristocrat – Trailer
For the Love of Self →