← The Life and Times of Clyde Kennard
SOUVENIRS OF SUFFERING: A Child’s Memoir of Surviving Cancer – Trailer → 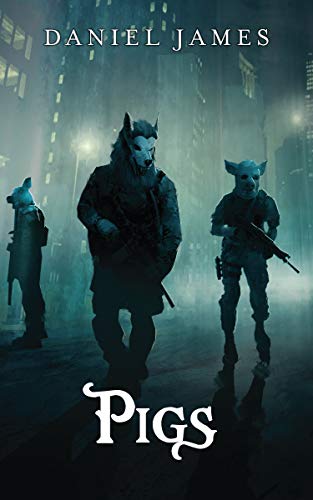 Pigs by Daniel James follows an ex-convict’s journey for vengeance. On the same night that he is released from prison, his wife and child are brutally murdered. Isaac Reid has to struggle with the guilt and desolation of losing his family. At the same time, he is confronted with an even more daunting challenge: a cold-blooded nemesis, the wearer of the wolf mask. We follow Isaac on his bloodthirsty path for revenge and root for him as he struggles against his internal demons.

This novel does not hold back on the bloody punches. The murders could be straight out of a Tarantino film, that’s how gruesome and well-portrayed they are. Violence and crime are treated in a matter-of-fact manner, which only serves to highlight their shock factor.

Although I am admittedly not an expert in matters regarding the criminal underworld, Daniel James manages to create a very real and believable world. Drug-abuse, petty crime, battery, theft, violence, all the terrifying aspects of a criminal life are explored here.

I think one of the reasons why this is possible is because the author is not afraid to dive deep into the characters’ psyches. The characters do not exist only in the dimension of their backstories and connections. Instead, their minds are explored and their motivations examined. Everyone from the protagonist and antagonist to the secondary characters receive this treatment. These examinations of their emotional and psychological beings made this a much more appealing read to me. I’ve always enjoyed deeply unsettling portrayals of psychosis and rage-consumed characters.

There were a few hitches in the form of clichéd and overdone violence scenes. Although they were well-written, they seemed to serve no purpose other than adding unnecessary thrill in an already action-filled book. However, it is a crime novel and I suppose that such depictions are an inbuilt evil of the same.

The book ends on a gloomy but hopeful note. Isaac commits just as many terrible and gruesome acts as his enemy, but somehow, via masterful navigation, Daniel James still had me rooting for him till the end. Pigs is an intense and gripping read. It will take you through a dark wormhole, at the end of which there is a sense of stability, but very little light.

← The Life and Times of Clyde Kennard
SOUVENIRS OF SUFFERING: A Child’s Memoir of Surviving Cancer – Trailer →