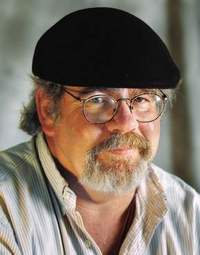 “End Times” is satirical look at a dystopian America that is eerily reminiscent of real life. What was the inspiration behind this thought-provoking novel?

I combined my own experiences as a journalist covering this political devolution in style and content to use satire to explain the collapsing political climate and set the stage for a Real America.

I’ve been asked numerous times in interviews and in speaking to groups how the Real America of my fevered imagination came about. I have said repeatedly anyone paying close attention to the dark roots of American politics since say 1980, or at least since 1994, would see something seriously amiss. In particular, in case you haven’t noticed, the Republican Party has gradually abandoned the idea of governing and embraced wholesale nihilism. They replaced it with a maniacal dedication to the snake oil of cutting taxes for the already filthy rich, filling the federal judiciary with as many unqualified and ideologically stupid judges imaginable, driving up federal deficits to science fiction levels, and generally mucking up the fragile nuts and bolts of democracy on a daily basis.

I chose a satirical fiction avenue because I wasn’t interested in writing a more conventional non-fiction book about what was happening.

Lawrence Bowie is an exceptionally developed character that I loved to hate. What were some themes you felt were important to capture in his character?

Good point: Bowie is either loved or hated with no middle ground. He was an amalgamation of five to six (real) Republican politicians known for their profound ignorance, incoherence and ability to lie without hesitation. In the first book (“The Execution Channel: A Political Fable”), one of the original concepts was the existence of a Congressional “Imbecile Caucus” and then I needed an incoherent and ignorant savant to lead them. This led to Congressman Lawrence C. “Demon Seed” Bowie of Texas who would go on to become the governor of the Real America Republic of Texas.

The totally immoral Bowie arrived to take advantage of a cynical climate ripe for a rabid minority to worship a truly corrupt leader. This pied piper would mock and degrade his followers while demanding their total loyalty and calling it love. He promised the best traits of a national crime syndicate and a death cult. He would keep them entertained with blatant racism, lies, fear mongering, conspiracy theories, and embracing ignorance. Bowie, a true pathological narcissist, would be the first to tell you, he made his mark before Trump in part because there was no shortage of marks in Real America for his political con. Bowie’s career path would eventually lead to a Real America secession and glory as Emperor Supreme for Life of Real America. Bowie keeps the public stupefied with cruel spectacle and the excitement of secession and a 21st Century Civil War.

“End Times” is meant to entertain and enlighten with equal amounts of satirical humor, zaniness, and shock. The book is not for the political faint of heart or for those who believe America is on the right path. In a sense it’s not unlike the ghost of Christmas future in “The Christmas Carol”. I’m not saying this or that will happen. I am saying this alternative universe of Real America has the same seeds of decay and fraying of the chords of civility and decency that we see happening each and every day now. Though some may disagree, our American democracy is fragile and ripe for further destruction. Real America is one many dark versions that could replace our current political system – if the slippery slope of more economic and social chaos, less accountability, crueler and blatantly racist policies, and destruction of democratic norms continues.

Penelope will the third and final book in the Real America saga. Hopefully, by 2021-2022 readers will experience the final showdown between Penelope the Psychic and Emperor Supreme for Life Bowie. 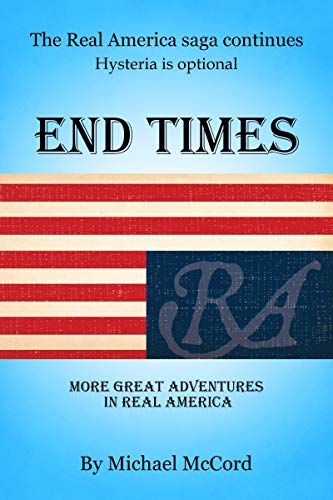 Michael McCord’s provocative 2013 political satire The Execution Channel: A Political Fable was the first act of the Real America saga.

The saga continues with the fantastical and farcical End Times: More Great Adventures in Real America. Set in an alternative (yet eerily familiar) political universe, this tale of American dystopia answers the question: What happens when America goes politically bonkers?

The colorful cast is topped by the righteously amoral and thoroughly corrupt Lawrence C. ‘Demon Seed’ Bowie. After surviving an attempted coup in 2018, he has rebounded with his customary good karma. Bowie is Chairman, CEO, President, and toga-wearing Emperor Supreme for Life of Real America, Inc., the Confederate-admiring, whites-preferred, and corporate-run nation that seceded from Old USA in 2020.

As he nurtures a new country combining the best aspects of a national crime syndicate and a death cult, Bowie prepares for a 2021 Coronation Night extravaganza to celebrate his magnificence and dazzle the world. Though his apocalyptic destiny seems assured, a rising resistance and many foes conspire against him and threaten the Real American dream.