Demon of the Black Gate 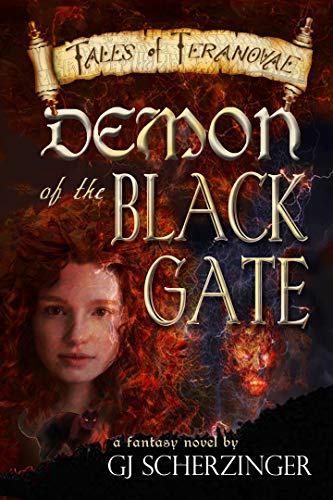 Rovinkar, the wizard, holds in his hands the key to instigating a war like no other. Cerra, a blind woman living alone in the meadows, knows only what she feels and hears. Their two worlds collide when power goes to Rovinkar’s head and he offers to destroy the Black Gate thereby beginning a string of devastating events. Rovinkar’s offer involves much more than just his expertise, detailed research, and a desire to prove his usefulness–it involves releasing a demon. When the best laid plans go awry, Cerra becomes involved in ways she could never have imagined, and her simple life in the meadows tending herbs will never be the same.

The Demon of the Black Gate, by G.J. Scherzinger, details the devious musings of the wizard Rovinkar and the strength of character shown by Cerra of the Meadows. The author’s two main characters could not be more different–Rovinkar dealing in what amounts to the dark arts and Cerra living her life by touch, sound, and smell. Cerra, a seemingly powerless woman, is the clear heroine in Scherzinger’s tale and stands far above all other characters including Rovinkar.

Fantasies of this type are known for being fraught with flowery language and bigger-than-life characters, but Scherzinger has found and given readers a wonderful balance between the typical fantasy and a down-to-earth read. From the first chapter, the author provides characters who relate to one another as people and in a way readers can appreciate. There is an abundance of friendly banter between characters at the outset of the book that draws readers immediately into the story-line.

Cerra must be the very definition of strength. The peek into her backstory serves to draw readers in and secure their investment in her connection to the plot. It is difficult to imagine another character without her physical limitations who is willing to take on the immense tasks she does. I appreciate the symbolism in Cerra’s position as a healer. Her position later in the story makes it quite clear that she is the epitome of rebuilding and reviving.

Equally as effective are the author’s fantastically fashioned descriptions of the wizard, Rovinkar. As he sets about plotting the release of the demon, one gets a clear picture of the wizard practically rubbing his hands in sheer delight–he is quite the character and one readers will love to hate.

Scherzinger’s fantasy is peppered with humorous and engaging lines that offer a welcome sense of levity within a plot that could otherwise become very dark and foreboding. It goes without saying that Scherzinger gives readers amazing visuals of the surrounding countryside  From cover to cover, readers are treated to beautiful descriptions and vivid details. I am much more interested in characters and their development from beginning to end than scenes of action, and Scherzinger does not disappoint in this arena.