XHOSETI: AD 2492 is the second novel in your Xhoseti series where the Guardians must prepare humans for the coming war against the Xhoseti. What were some ideas that were important for you to explore in this novel?

The idea for the books started when I was in South Africa over a few beers with my father who was convinced that the human race had come from another galaxy and that there were 7 tribes who had been sent to Earth to see if we can co-exist with each other. This is an ongoing experiment as there is a galactic eternal war happening between many different species and they are at a stalemate. Project Earth is what I am writing about, and as such will terminate in the end of the experiment – eventually…

You give a new perspective to human history in a way that leads to one goal; preparing humanity for the coming war. Where did this idea come from and how did that develop while writing?

In the story, the human race has colonised a planet approximately 12000 light years from Earth namely, Termite, and they have discovered a future prediction machine which the Freemasons on that planet use to prepare for a war with the Xhoseti. They know they will lose the war and need to come up with a plan ‘B’ if mankind is to survive, so they head of to Earth. Which they have already tried to colonise one in the past and failed, another story in the wings.

Was this book a natural extension of book one Xhoseti Moon or did come after you finished the first book?

I have unfortunately sent the books to Literary titan in the wrong order. The first novel is the start of the story and is Xhoseti First Contact, which I might add is still to be reviewed. So the Xhoseti Moon story is a follow-on from Xhoseti AD2492 which in turn is a sequel to Xhoseti First Contact.

Will you write a third book in this series? If so, where will the story pick up?

The third or first book I will send through to you for review as soon as I get my a into g. I work as a full time piping stress analysis engineer and move around from country to country quite a bit, my apologies. 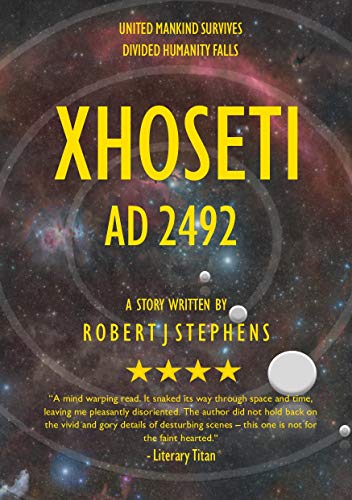 The Pyramids are complete. The weapons have been installed.

All that remains is to stop the wars and unite mankind against the Xhoseti when they arrive.

Will the Grand Master succeed with Plan “B” and finally create a united front against the insectoid invaders?

Will man unite to defend the Earth against the Xhoseti or will their infighting be mankind’s downfall?

The eternal war between the two species wages on,one trying to survive the other trying to enslave… in the 2nd book in the Xhoseti series.