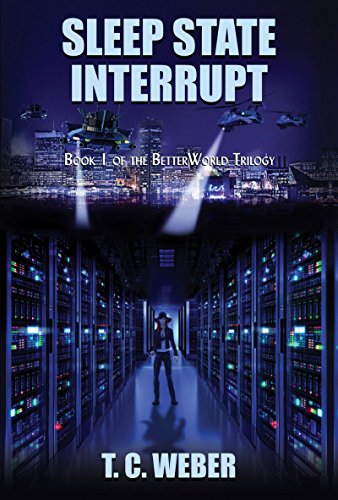 If most contemporary sci-fi is headed in the direction that Sleep State Interrupt is taking, I will be more than pleased. And a lot more concerned for humanity. Sleep State Interrupt tells the tale of protagonist Waylee who wrestles Big Media’s omnipresent influence. In this dystopian world, the government and people are heavily influenced and practically controlled by the media that surrounds them. Waylee and a couple of her technologically proficient friends plan a simple but brilliant plan to end this problem. They decide to capture and bring to light some incriminating dialogue that will shed light on how truly awful the situation has turned. However, she faces hefty roadblocks along the way, that occupy both her inner and outer world.

The premise of this story is like Mission Impossible meets the Avengers, but smarter in its portrayal of a dystopian world. There’s no question about the role media plays these days. Targeted advertising, subliminal influencing, endless privacy violations- all this is already unsettling. Weber takes this concept and pushes it to a terrifyingly believable level. The story is heavy on politics without naming names, I feel like I could probably point out some similarities in their evil politicians and our own.

One of the more interesting aspects of the book was that it forced me to take a stance on some issues that I would generally avoid thinking about it. There are a lot of moral and philosophical questions that are subtly posed throughout- and it’s a refreshing take for a cyber sci-fi novel.

Weber has clearly put in a lot of effort to nonchalantly feature a diverse set of characters. While all of them were interesting and unique, sometimes the characteristics felt a bit forced. Waylee’s character on the other hand was a masterpiece. From the realistic perspective offered on her disease to her upbringing and environment, her protagonism was undeniable. I could tell where all her actions and motivations were coming from.

I have always enjoyed politically-charged thrillers because it brings to light the fact that humanity is capable of creating its own nightmarish vision. Sleep State Interrupt portrays this with clarity and believability, without compromising all the fun that a government takedown story offers.