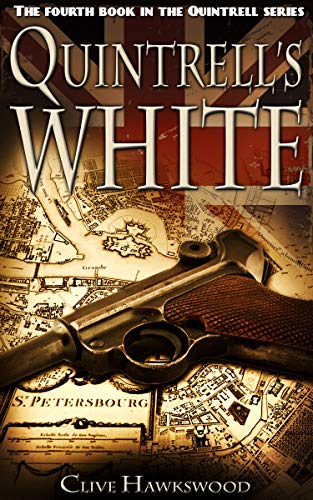 Quintrell’s White is based on historical events that affect global politics. In this book, Clive Hawkswood creates a plot that is both fascinating and engaging. The year is 1916 and the world is threatened by the first world war. The political climate is hot with opposing camps flexing their muscles. Every country wants to appear superior and some parties are causing political unrest. America is going through difficult times. The political landscape is hostile as there are elements that are causing political instability and Russia is not safe politically either. Certain individuals and groups are plotting events that will cause massive damage to the entire world.

Amidst this confusion is a character known as Kurt Draxweiller who is the leader of the cult, Ultima Thule Verband, that operates in a similar manner as the Nazis. Kurt Draxweiller is a danger to the world. His followers are a threat that needs to be dealt with otherwise world peace will be at stake. Infiltrating Ultima Thule Verband is not going to be easy and the story does a fantastic job of blending both mystery and suspense around this cult. Kurt is an enabler of the Keizer’s Germany, something pro-peace parties do not appreciate. Kurt Draxweiller has to be stopped using whatever means possible and this overriding need throughout the book kept me turning pages. Tsar’s most reliable assassin, the Dragon and captain John Quintrell can stop him. The men are both powerful and prudent in how they move and I appreciated the slow and deliberate buildup of both characters.

Quintrell’s White is a thrilling story that constantly kept me on edge as I was never sure where the story was going next. The journey to get Kurt was thrilling to follow. Reading about the fights with U boats and encountering Mexican rebels was fascinating and showed sides of the war that I never considered. Plot twists I rarely saw coming kept things consistently interesting. You will love this book if you are an enthusiast of political stories that touch on historical events. The adventure, suspense and smooth flow of the story are some of my favorite elements in the book.

Clive Hawksood knows when and how to grab the reader’s attention in his narration. His use of suspense in the book keeps you guessing as you read on. The author’s sense of humor is worth mentioning too. Witty and funny lines pepper the story. Clive Hawkwood has created intriguing characters who excellently executed their respective roles. I recommend Quintrell’s White to readers who enjoy a good political and historical thriller that has a quality story line.