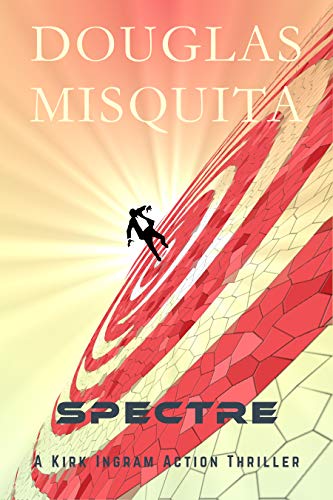 Spectre: A Kirk ingram Action Thriller is practically a movie in its embryonic stages. It features a tortured protagonist accused of being the perpetrator of a heinous crime, a tragedy-stricken sidekick, and perhaps most interestingly, the history of Christianity woven throughout the plot.

The story begins in 33 CE with a vague and mystifying account of a Jewish household. We are then brought forward 300 years, where a power-hungry emperor attempts to popularize the new religion Christianity and claim it for his own. However, we discover that there are people with supernatural powers, almost otherworldly that add conflict to the situation. Now, in the present day, former FBI agent Kirk Ingram is thought to be the killer of nearly all of an abbey’s residents. Using his wits and increasingly untrustworthy body, he pairs up with the last remaining resident of the abbey, Jovanni, in order to solve the mystery and save the world from mysterious dark forces.

The book lives up to its title- it is most definitely an action packed, thrill heavy ride; I can almost visualize a Tom Cruise scene accompanied by a hardcore, brainy backstory. I particularly enjoyed this novel because it reminded me of my science nerd phase, where I was a hopeless Dan Brown addict. Some parts of Spectre reminded me of the Da Vinci Code– maybe because of the religion-forward detective work that was happening. But at the same time, Douglas Misquita’s own voice was unquestionably distinctive. I would think of it as Da Vinci Code meets James Bond meets Kirk Ingram’s particular brand of panache. I found myself comparing it to a lot of movies- which I would assign as a hefty compliment to the book. I have read so many thrillers where the authors waxed poetic on their knowledge of spy-related stuff, and while educational, I am hardly reading thrillers for their didactic value. Douglas Misquita kept it to the point: it was informative without losing its entertainment value.

The author’s incisiveness and knowledge also shone through in all the parts where he linked the past and present; religious movements and their effects. Kirk Ingram and Jovanni are also in no manner the flawless heroes. Kirk has a troubling past and faces ethical dilemmas throughout the book; not to mention a body that can betray him at any moment. I enjoyed this aspect of the character- it adds depth and dimension to what can often and unfortunately turn out to be a two-dimensional untouchable action machine.

Spectre: A Kirk ingram Action Thriller is a riveting and engaging story that I would recommend. Nothing like a religious conspiracy theory filled thriller to keep you up all night!