← The Lost Signal
U-10: The Most Ingenious Technology in the Galaxy → 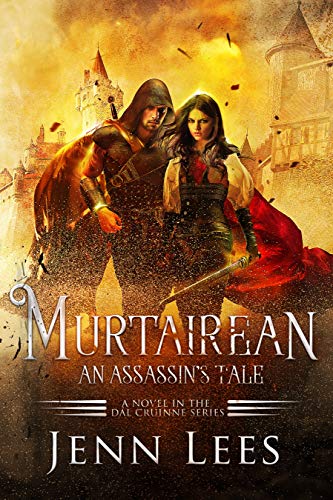 Murtairean: An Assassin’s Tale (Dal Cruinne Series Book One) by Jenn Lees is a fantasy story set in a medieval society with lords at war for power. Vygeas, a former assassin with the gift of heightened senses and perception, is locked in a cell in Lord Ciaran’s dungeon. Charged with desertion when he refused to kill innocents, Vygeas now faces hanging. But he is offered a stay of execution and a chance to win his freedom if he completes one final task–to kill a corrupt merchant on the Isle of Eilean. On the road to Eilean, Vygeas meets Leyna, a woman searching for the assassin who killed her parents. She is intent on exacting revenge. But when their convictions are tested, will either Vygeas or Leyna succeed in their aims?

Murtairean: An Assassin’s Tale is filled with intrigue and treachery, drawing me in from the very first page. The author’s descriptions of the setting and people painted a vivid picture of the story in my mind. I suspected early on in the story that Vygeas was the assassin who had killed Leyna’s parents, and I was interested to find out how she would react when she finally learned the truth. I don’t want to give away too much, but things are not what you expect. Leyna’s feelings are understandably confused, especially since she has come to like Vygeas and he has shown himself to be a good man deceived by lies.

Both Leyna and Vygeas are likable and sympathetic characters even though they have done bad things in their pasts and continue to walk a dark path. I enjoyed reading the interactions between Vygeas and Aiden, and the touches of humor that it added to the story.

But there were a few places where I would have liked more detail in order to fully understand the characters’ motivations. When Vygeas killed Elyse he did so because of Drostan’s threat to make her suffer a life worse than death. But I didn’t think there was enough details given to make it feel as though such a drastic action by Vygeas was truly justified. Why was he convinced that Drostan would follow through? I felt that it should have been elaborated on so that it was clear why Vygeas felt that he had no other choice. And it was never really explained why Drostan seemed to bear a personal grudge against Vygeas. Also, why would Lord Cairan bother with such as elaborate ruse to eliminate Vygeas when he could have just killed Vygeas outright? Needless to say, I was invested in the story.

The story ends on a happy-ish note, but Lord Ciaran is still a threat who must be stopped. The mention of dragons in the epilogue intrigued me. The series is definitely one I’m interested on continuing because of the intriguing characters and enthralling world.

← The Lost Signal
U-10: The Most Ingenious Technology in the Galaxy →