← A Journey Through the Darkness
The Reefs of Time →

The Revenged Queen takes place after Danielle exposes every dark secret her classmates have. What were some new ideas you wanted to pursue in this book that were different from the first book?

I wanted to up the game when it comes to this novel. I wanted to go darker, sassier, and overall bitchier. It was my favorite in the series because I wanted people to feel like the gloves truly came off.

The characters in this book are well developed and diverse. Who was your favorite character to write for?

Honestly, Bethany was my favorite to write in this book. I wanted people to understand her more since she was so just the villain. I wanted people to go she’s a bitch, but a lovable one. Also, Emily’s story arc was incredible too. I loved writing some fake and heavy stuff with her.

Much like high school, your characters are going through a lot of different things. Where do you find inspiration and how does it become ideas for your book?

I let the characters take me there. I know that sounds so arrogant, but I just write what they’re doing. I’m surprised with how much they shock me or take me a place I didn’t expect them to take me. I wish I could say it’s from my persona life or ones around me because that would make me feel better writing future books and not having my characters inspire me.

One Queen of an Ending is book three in the High School Queens trilogy. Where will the story take readers in the final chapter?

Spoiler Alert, Jordan won’t be the only death in this trilogy. It’s going to get even more intense. I think the bitch wars ends with a bang. i loved that i highlight all that I felt emotionally connected in the series in this. It’s dark and dramatic. It opens at a funeral, so I’m ready for everyone to read the final in the trilogy. 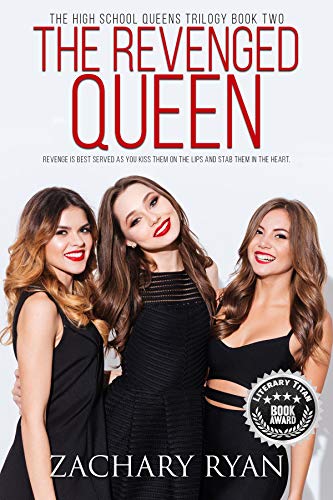 No one knows the real Marked Queen, but now everyone wants to know her. In this sequel to the insatiable first novel, High School Queens, you will die to know more about your favorite dirty little Queens.

As we say goodbye to the Johnson Prep Seniors, the scandals and lies that exposed them in the beginning are back with a vengeance.

The Marked Queen thought she had the last laugh at prom. Now, it seems a new girl is coming for her crown. With a new title, The Revenged Queen, she was out for blood and her prime targets—the ones exposing everyone’s dark and dirty little secrets. As we dive deeper into this scandalous and humorous world of prep school teens, we learn that everyone is a hustler with a secret and a Hollywood sob story.

As the scandals pile up in front of them, their secrets will be exposed… And each secret is even more delicious than the last.

← A Journey Through the Darkness
The Reefs of Time →