The Concept of the Soul

Transference explores the possibility of eternal life and its impact on society. How did this idea start and change as you wrote your novel?

Transference literally started off a two-page hot mess. (laughs) It was a short synopsis for a movie. It grew from there and sort of took shape on its own as I rolled it around in my brain over the period of a year or so. Once I decided that it should be a novel instead of a script, I fleshed it out, somehow, and then wrote the book in about 8 weeks. It’s hard for me to remember all the little details because I wrote it over seven years ago! I knew right from the start I wanted to tell a story similar to Star Wars (because my dad loved those movies) and I wanted to honour his memory by writing something I thought he would enjoy. And also, I wanted the book to contain sci-fi elements that I had not really seen in other works before. The concept of the soul being real and tangible actually came (loosely) from Ghostbusters. By the end of the developmental phase—and after all the many, many edits—I realized the book was very much about family in a way that I had never intended, or expected. And I’m so glad for it.

Barrabas is an intriguing and fun character to follow. What were some ideals you wanted to capture in his character?

I’m glad you liked him! Barrabas is interesting to me, too. I think that’s because he wasn’t written to be the protagonist. I feel like he finds himself surrounded by the real protagonists. That’s not to say he’s a bad guy, he’s just an everyman who was put into a bad situation by, among other things, being at the wrong place at the wrong time. The name Barrabas was always intriguing to me as well, and I’m not sure I can answer why that is. In terms of his character, though, I think he’s very much “me”… but also part of my brother… and my dad, too. He’s every important man in my life, basically. It’s funny to be talking about him in this way, because it’s almost as if I had nothing to do with his creation.

I found this book to be thought-provoking as well as entertaining. What were some themes you wanted to explore in your book?

I am chuffed to bits to hear you say that. That was all I really wanted to do—to entertain and maybe, just maybe, make the reader think a little bit. And I’m talking to myself too as I say that. I wondered what it would be like if we could quantify the soul, or, at least to capture it, and then keep it here in this plane of existence. And if we could do that, then it just seemed to me that it was possible to move souls from body to body. With that came identity issues, and the conundrum of “playing God,” all of which intrigued me. But that’s all the heady stuff! (laughs) Ultimately, the book is about a lot of things; revenge, jealousy, rebellion, love, and family… and in the end I’m kind of asking the reader how far they’d be willing to go for what they love more than they love themselves.

I love time travel, so my next book is about that. A few years back I started researching the theories behind it so I could talk about it competently, or at least sound competent. I’ve got the beginning and the end, it’s just getting through the center that’s the hard part for me. But, since I’ve got point A and point Z, I should be able to get there… eventually. I’d like to have it finished, edited, and ready to go by the end of 2020. But I’ve inadvertently thrown a monkey-wrench into my own head with Transference, and a sequel for that is now brewing in my mind. It seems to want to take precedence over anything else. Funny that, eh? (laughs) Also, I’ve written two children’s picture books that I’m so in love with (one is about clowns, and the other about snails) so I really want to get those out into the world for the little ones to enjoy with their parents. 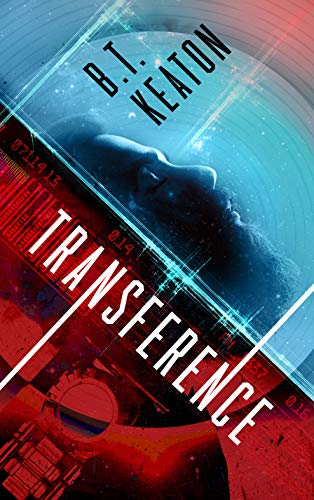 Eighty years from now mankind has discovered the secret of eternal life. Human souls can be moved from one body to another through the process known as transference. Control of this new technology has fallen under the dominion of Jovian, a powerful prophet and head of the Church which governs every aspect of existence.
Banished to a mining colony on a distant planet for lawlessness is Barrabas Madzimure, the king of thieves. Only when Barrabas faces execution does he claim that another man committed his infamous crimes decades earlier. The authorities are suspicious. Is he the Madzimure of legend and a potential threat to Jovian’s new world order, or just another victim of transference?

The epic story of a personal mission, Transference takes the reader on a heart-racing journey through rebellion, revenge, self-sacrifice, and the soul’s search for identity.

When everything you believe about civilization is a lie, the ultimate power is truth.