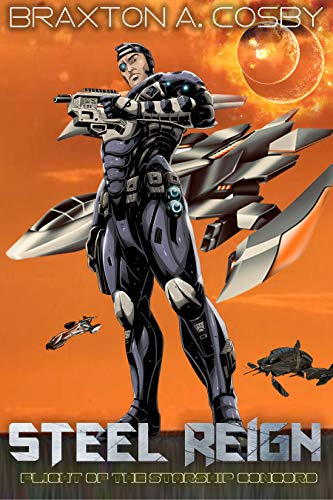 Steel Reign: Flight of The Starship Concord by Braxton Cosby begins with an intriguing and haunting scene. The protagonist, Steel Reign is expressing his regret over a massive mistake that he has made. Just from this singular scene, it is clear that he will go to any means to bring back his lost sister, Olia. She is aboard the ship Eclipse and involved in a treacherous game under the space pirate, Forge. Reign does not have the means or credits to find her. His sole plan to acquire an artifact and exchange it for credits has fallen through. He keeps having to devise Plan Bs to reach his sister. Along the way he manages to acquire a ragtag bunch of friends and colleagues: nerdy Gifford, the novice Stink, and Sereas. On top of these struggles, he is also combatting the deadly virus DX that has practically taken his eyes.

Steel Reign: Flight of The Starship Concord manages to hold a quick-paced, thrilling tone, as Reign is thrown from one dangerous situation to another. The prologue also returns in a more meaningful way later in the story as Forge’s sick game becomes clearer.

Throughout the story, a lot of different species and creatures kept cropping up. At first it was a bit jarring and difficult to keep up with, but the descriptions were so fun that I couldn’t resist being drawn in anyway. Take for example the Donthras that are described as being “multi-sexual” and “open to trying anyone and anything” Although there was an underlying intense tone to the story, the moments of levity were perfectly captured and made me laugh out loud.

Reign himself isn’t infallible though- which I personally love in an action/adventure protagonist. So often they seem to fall prey to being all around superhumans (see: Jack Reacher, Stephanie Plum)  but Reign knows his strengths and weaknesses. He even manages to acknowledge that he was the brawns in the sibling relationship and Olia the brains. The pair has had a difficult upbringing but share a very sweet and strong relationship. I felt immediately sympathetic and connected to Reign whenever he reminisced about his sister.

Steel Reign was a solidly entertaining novel- a strangely perfect amalgamation of science-fiction, revenge drama, and ensemble comedy. It hit all the right spots for me and was a great weekend read.