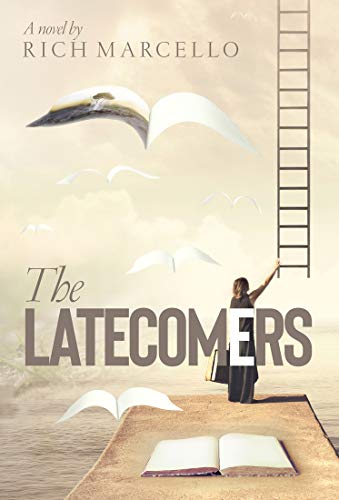 Charlie and Maggie live with a connection so deep and moving that years, hardships, and a wheelhouse of personal issues cannot penetrate it. After years of a unique and solid marriage and the building of a life rooted in creative arts, Charlie makes an announcement that will forever change their lives. Maggie, not one to fall quickly or think slowly, is taken aback and finds herself teetering on the edge of a new horizon yearning for stability and reaching for answers she is afraid she actually may already know. When feelings alone are enough to keep two people tied, anything is possible, right?

The Latecomers, by Rich Marcello, is the gripping account of the intertwined lives of main characters, Charlie and Maggie. The two have a bond that far surpasses that of most couples. I have to say that I am amazed at the dynamic the two share in the outset of the book. From the beginning, readers are able to see the connection and feel it on an almost visceral level. Interestingly enough, I can’t say that I view the relationship as one I would label with the word “love.” Theirs is more a matter of necessity; it is as if their very souls are one and know no separation.

I am sure other readers may disagree, but I see Charlie as weak. The circumstances in which he was raised and the questions surrounding his own birth have made him a man who seeks answers. In that quest, he loses focus quickly and easily and has allowed this to lead him astray in more than one way. As a reader, I feel frustration with him and for Maggie.

Maggie, much stronger and more of a fighter than Charlie, is a force with which to be reckoned. I am in awe of the power that Marcello has given this character. Having given the better part of her life to Charlie, she is left on a limb feeling everything he endures from afar as she tries to sort out why she is physically alone but emotionally tied to him.

Fans of romance with well-developed characters will appreciate The Latecomers. One of Marcello’s most effective techniques is the inclusion of anecdotes and memories throughout the text. Looking back on the years through the character’s eyes is helpful as he develops the plot and brings readers closer to the characters. It is a truly beautifully written reminiscence of their lives together.