In Crocotta’s Hackles we follow Lluava’s mission to uncover the truth about the Incarn and how that affects her future. What were some ideas you wanted to explore in this book that were different from the first two books?

Crocotta’s Hackles differs from the first two books in a number of ways. For example, both Issaura’s Claws and Ullr’s Fangs deal predominately with the Kingdom of Elysia’s human-oriented society who comprise the ruling class. The native Theriomorphs, a shapeshifting race, have been forced to assimilate into the human culture. Most Theriomorphs have altered their clothing, switched their religion, tweaked their names, and lost touch with the customs, social institutions, achievements, and arts of their own culture. In Crocotta’s Hackles, both readers as well as the main character, Lluava, discover what Theriomorph society was like before being conquered by humans. In a sense, I wanted to express the tragedy and loss of forcing a people to assimilate into another culture and lose their own in the process.

I also wanted to showcase women-in-power in a world that is primarily patriarchal. By the third book, readers are already familiar with Lluava’s warrior-type personality. In Crocotta’s Hackles, I introduce other strong women whose strengths might not be physical, but their gifts and talents are no less impressive. Other aspects that I wanted to flesh out were the interrelated concepts of the Incarn, prophecy, fate versus free will, and the ever-present questions of whether Theriomorph gods exist, and if so, do they care about their people? Lastly, I wanted to make it very clear that no race is entirely good or evil. There will always be individuals and subgroups that defy stereotypes.

I liked how you handled the point of view in Lluava’s dual form. How did you plan this part of the novel?

As a Theriomorph, Lluava Kargen’s point-of-view is intrinsically different from a human’s simply because of her birthright. All Theriomorphs are born with the ability to transform into an animal form, their dual form as they call it. They not only think and act like humans but also have innate abilities including hyperactive senses and instincts that is indicative of their animal nature.

Lluava’s dual form is a white tigress. Unlike humans, she has keener night vision, better hearing and sense of smell, and a sixth sense for oncoming danger. In this book, she struggles with a darker side of herself, and it appears to be a losing battle. When this aspect of her personality is triggered, she experiences a telltale alteration of vision, and the world appears in tints of blue and green—the colors that felines can see. If she succumbs to that darker side, she risks blacking out. When she loses control, the white tigress takes over, leaving bloodshed and carnage in its wake. Her fear of losing herself creates a dichotomy within her, and she does not know if she can ever trust herself in her animal form.

Fear of the “Beast”, as well as the “monster within”, has existed for centuries. From werewolves and vampires to the terror of Jaws and serial killers, the phobia of bloodthirsty beasts and losing oneself to a darkness persists in many forms. I wanted to fuse these fears with Lluava’s more-than-human viewpoint previously established in the earlier books. This was an entertaining and unnerving concept to play with and explore.

There is an exceptional cast of characters in this book. Who did you enjoy writing the most?

Although I always enjoy writing Lluava, in this book, my favorite character to write was High Priestess Yena. She is very complex. Driven to do right by her people and the gods in which she believes, Yena is fierce, regal, mysterious and a dark beauty. She is a powerhouse; beware any human or Theriomorph who stands in her way. Her seeming ability to know what is to come gives her an exceptional advantage and her unshakable faith kindles her inner fire. I can still hear her sharp keel of laughter even though I have moved onto other projects. Yena will always be by my side for better or worse.

What can readers expect in book four, Giahem’s Talons?

The final book, Giahem’s Talons, chronicles the last stand for the Elysians as they struggle to fend off those that wish to destroy their kingdom. Readers will learn more about the mysterious Obsidian Guard, experience some of the power of the Incarn, discover the Raiders’ true leader, and mourn the loss of those that fall in the midst of battle. War is dark and dismal for all sides, and this book does not shy away from that hard truth. 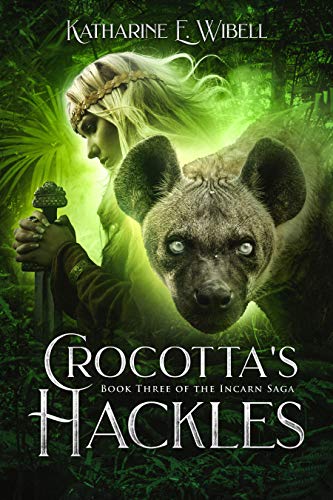 “According to legend, when the world was young, Crocotta, Queen of the Gods, discovered her mate’s faithlessness. She vowed to prevent future threats to all matrimonial pacts henceforward, but for her it was too late. The child born from the illicit coupling was a warrior goddess—one whom Crocotta would seek to destroy throughout eternity. Now that the Raiders’ elite army is threatening the kingdom of Elysia’s northern borders, seventeen-year-old Lluava must leave the familiarity and safety of her native land to venture into the wilderness. Her mission is to discover others like her who will come to Elysia’s aid; her hope is to unravel the secrets behind what it means to be Incarn. But what she finds could destroy everything.”