Murder at First Pitch follows Madeline and her pursuit to clear her brothers name after he’s accused of murder. What was the inspiration for the setup to this thrilling story?

As with most cozy mysteries, there is some sort of incident that directly affects the main character and their choices. I knew I wanted to make it a family connection since the ballpark and family business was the center of the book. I also think it gave Madeline a way to realize just how much the ballpark and the team were important to her.

Madeline is an intriguing and well developed character. What were some driving ideals behind her character?

​Family is one of the most important things in Madeline’s life. Even after thinking she was going to make a career outside of the family baseball business and having to rethink things, she realizes that her place is with her family. The team had been such a large fixture in her life, and by returning, she becomes closer to her family and friends. Her career is still important to her, but she realizes that she needs both the career and her ballpark family in order to be happy.

Why did you want to write this story, and series, within the baseball culture?

​I’m first and foremost a huge Boston Red Sox fan. I’m a baseball person through and through. When I was beginning my journey to be a mystery writer, I thought about all the things I enjoyed, and what I would be most interested in staging some. I hit on baseball (no pun intended) as the perfect location. There are so many sports fans who aren’t represented currently in the cozy mystery market, so I wanted to share my baseball love.

It’s a love letter to my Grandpa Asselin, who got me into baseball on the radio many summers and to my Grandma Asselin who was obsessed with mysteries.

This is the first book in your Ball Park Mystery series. What can readers expect in book two?

​Book Two will continue to explore Madeline’s new job and the ballpark events. The readers will visit another fictional ballpark in Salem, MA and meet more people from the neighborhood. I hope to introduce more real-life Abington businesses and residents in honor of my hometown. Madeline and Davis will continue to grow closer, and of course, another set of crimes. Stay tuned! 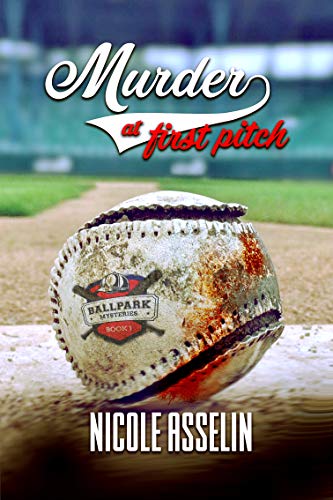 32-year-old Madeline Boucher’s Grandfather instilled a love in the Boston Red Sox into her from an early age and increased that love by purchasing a local Independent League Baseball team, the Abington Armadillos.

After losing her corporate job in Boston, Madeline realizes her best option is to join the family baseball business. As the new “Social Media Director” for the team, Madeline attends her first business function and witnesses an argument between her brother Ben, and a strange man.

A few days later when walking the ballpark during her early morning hours, she finds the body of a man beaten to death with a baseball bat in the Visitor’s Dugout. It was the man her brother was arguing with at the party. Madeline is concerned that her brother would be considered a suspect. Through the local Detectives and Davis – the head of security for the ballpark she learns the victim is Christopher Dailey, a local baseball scout and prior felon.

When her brother is arrested and taken to the police station, she realizes she needs to figure out who the real culprit is, so her brother doesn’t take the fall for something she knows he didn’t do.