← State of Grace
Who’s Jerry? (The Seen and Not Heard Series) →

Bedeviled by Her Suspicions 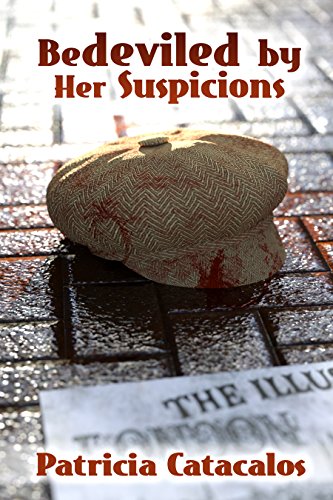 Bedeviled by Her Suspicions (Zane Brothers Detective Series Book Two) by Patricia Catacalos is a historical fiction mystery set in London in 1888. Isabel Haynes is a milliner who suspects that her cousin, Thomas Haynes Cutbush, might be the serial killer known as Leather Apron (Jack the Ripper), murdering women in Whitechapel. She enlists the help of the Zane Brothers Detective Agency to prove that her suspicions are wrong. Isabel feels drawn to Noah Zane from their first meeting. Noah pretends to be Isabel’s beau so that he can remain close to her. Can he protect her from harm as they search to find the truth?

I enjoyed reading this riveting historical thriller. I love mysteries that keep me guessing throughout the story. Part of this story is told from the point of view of the killer, and the few clues that are given match up with Thomas, but could also indicate several other characters. I was immediately suspicious of every man described with a handlebar mustache, since that was the only identifying physical feature that was mentioned about the killer. Although this is the second book in the series, it is not necessary to read book one to enjoy this story. This books can be read as a standalone mystery story. Book One, The Mystery of Her, features Noah’s older brother, Zachery. Book Three and Book Four both feature Noah’s younger brother, Evan.

While I enjoyed this story, I felt that the romance happened a bit too quickly for me, with Noah and Isabel declaring their love for each other within a week of their first meeting. I liked the historical Victorian setting of the story, which was vividly described, but I felt that some of the descriptions of actions were unnecessarily specific and distracted from the flow of the story.

← State of Grace
Who’s Jerry? (The Seen and Not Heard Series) →