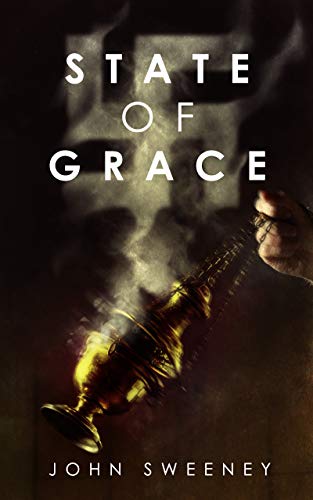 State of Grace by John Sweeney is a fast-paced and intriguing espionage thriller that will keep you eagerly flipping through its pages. Set between World War I and World War II, State of Grace tells the story of Phillip Kumar, a young man in London who is recruited by the British intelligence service for a secret mission in Germany. Phillip, a completely quotidian man with no experience as a spy, accepts the mission and finds himself in Bavaria, at the center of history as the National Socialist (Nazi) party grows in power and begins setting in motion their horrific and racist work.

The novel follows Phillip, who, in spite of his inexperience, is rather likable and an enjoyable protagonist. Though Phillip is of mixed heritage, he passes as someone with Nordic roots. It is through this lens that most of the novel is experienced – Philip, concealing his Indian roots, is both blessed and cursed with his Nordic looks, as in Germany he is welcomed and admired as an “Aryan” Adonis, while in his heart he knows that the racial preference he receives and the work of eugenics that many in Germany advocate is deeply wrong. As Phillip embarks on his mission in Bayreuth, a university town in Bavaria, he quickly falls in love with Ruth, a young woman of Jewish heritage. Their relationship highlights the fractures within German society and the not-so-subtle racist sentiments held by many, in Germany and beyond.

What I enjoyed about State of Grace primarily was its setting, both in time and location. I find the interwar period to be exceptionally fascinating, especially in southern Germany, where the Nazi party came to power. I enjoyed how Sweeney juxtaposed his novel with many of the actual historical events that occurred at the time, though of course this is a work of fiction. I also enjoyed that Sweeney did not single out Germany as the sole perpetrator of racist activity during the interwar period; he puts both Britain and the United States under a microscope for their racist principles and activity, which is a dark side to these countries’ history of which many may have been unaware. Additionally, I have had the pleasure of visiting Bayreuth multiple times, and was excited to read a book set in this quaint city. I enjoyed picturing Phillip, Ruth, and the supporting characters of State of Grace running through the cobbled streets of Bayreuth, where I, myself, have walked many times.

Where State of Grace could have been improved in my opinion was in depth of character and plot. The novel is fast-paced, which is often a good thing, but I found that it felt rushed. With numerous minor supporting characters, I found myself somewhat confused about who was who and what was important. The character relationships felt rushed and forced as well, with Phillip falling for Ruth in seemingly a weekend and for no reason other than her availability. In spite of these things, I thoroughly enjoy reading State of Grace for its creative story and honest examination of racism in many countries in the interwar period. I would recommend this riveting story to readers interested in history or spy novels.