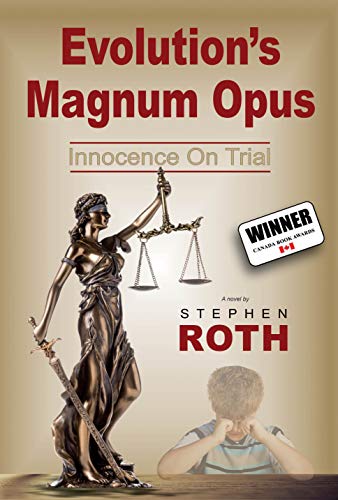 In Evolution’s Magnum Opus Robert Hiller is an elementary school teacher who is accused of sexual abuse of a student. Ten-year-old Tommy Henderson testifies about what happened during several overnight stays at Mr. Hiller’s cabin. When the trial is over, Tommy’s life spirals further out of control. His mother doesn’t provide the support he needs, forcing him to struggle alone. He leaves home at sixteen—yet he can’t outrun the nightmares that keep him awake at night. Will he be able to battle his demons to escape from his past? Or will it continue to haunt him many years later?

The story that author Stephen Roth tells is complex yet easy to follow. Learning how the different pieces fit together and the way that various characters were connected to others, sometimes even more than a decade later, was something I found deeply compelling about this novel. This dramatic and emotional story is elevated by slow but intricate character development. Each was shown as flawed, and making errors in judgement. The author told the story from the point of view of numerous characters, which gives the reader additional insight into their actions and motivations. The significance of certain events was not revealed right away, which kept me interested in the story. It was also interesting to read about the differences between the Canadian legal system and the American system. During the second half of the book, when Tommy is an adult, there were lots of intrigue and unexpected twists.

While I enjoyed this novel, I felt that the beginning of the novel was slow because of the large amount of backstory provided and details about characters, but once we get past this point the novel’s pace and intrigue picks up. The timeline is not linear and jumps around a bit, along with a cast of intriguing characters, readers mind’s will be fully engaged.

Evolution’s Magnum Opus is a riveting legal drama that follows the life of a compelling character and provides readers with a high level of drama rarely found in contemporary fiction.