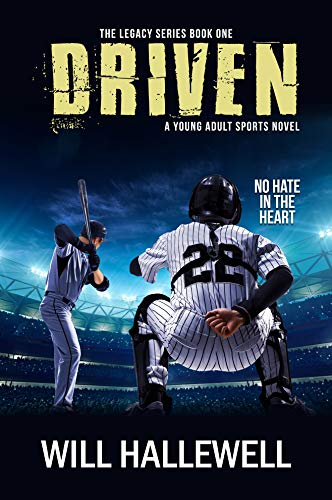 Driven by Will Hallwell is the first novel in The Legacy Series. Set in a small US town, the young adult novel uses sports to explore themes and life lessons. Hallewell’s descriptions of the small town are detailed. He describes the physical and geographical aspects of the town, such as the creek, and the quaintness of the village with vividness. Hallewell also describes the makeup of the population and the divide among the community. The setting of Falls Creek is integral to the story, and Hallewell sets the scene for the novel well.

The main character in Driven is Gabe “Honus” Wagner, a senior at Falls Creek High school. Gabe is a star baseball player, but feels he is being held back by the coach who appears to be favoring another student – whose father makes significant financial contributions to the school and other community ventures. This student – Nate Shaw also has a significant role in the novel. Both of these characters are well defined by their speech and actions, as well as physical descriptions, and because of this the characters feel real as well as authentic. Both of these characters are supported by a host of intriguing minor characters, that either side with Gabe or the Shaw’s. The characters are were grounded and I found that it was easy to differentiate between them.

Throughout the novel Gabe repeats the mantra “no hate in the heart”. It was given to him by his coach, and this mantra helps Gabe reflect on situations and ensure he doesn’t react in a hateful way. I thought that these were fantastic lessons for a teenager who encounters some difficult situations. I really appreciated that this young adult novel delivers some thoughtful ideas on morality; this sets it apart from other young adult novels out recently. The novel also delves into themes of depression and corruption; heavy issues but they are handled deftly. Hallewell broaches the theme of depression through Gabe’s father. Having recently lost his job, he slowly sinks into a pattern of drinking and sleeping and losing sight of his goals and his self-esteem. Driven shows the effect this has on both the person themselves, and other family members. The novel also delves into the age old question of money – can it truly make us happy? All of these ideas are explore in a thoughtful and engaging way, with family and sports as the backdrop.

Driven is easy to read and is consistently entertaining. I really enjoyed how Driven uses relatable characters to explore serious themes such as loyalty, depression, and the power of money are addressed. This is a novel that will teach you something while it’s entertaining you.