Don’t Mind Me, I’m Just Having a Bad Life 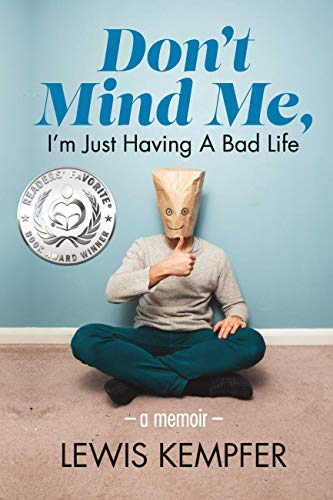 Trauma comes in many forms and affects more of us on a daily basis than most will ever realize. Without ever knowing it, we encounter people every day who have had more than their fair share of abuse, drug addiction, and depression. Some of those people have been dealing with that trauma from an early age–Lewis is one of them. As a very young boy, Lewis quickly learned who he could and could not trust, and he saw those around them for who they truly were. His young adult life showed exactly how much damage that abuse caused.

Don’t Mind Me, I’m Just Having a Bad Life is a poignantly written memoir by Lewis Kempfer. Nowhere else will readers find a more raw telling of one man’s life. Kempfer has revealed every wound he has ever suffered and each one of the horror-filled moments he has survived from his early days in Colorado to his nightmarish life in Nashville. He minces no words and gives readers every opportunity to learn from the mistakes he has made along the way.

I can appreciate Kempfer’s story in many ways. He lays down the ugly truth of drug addiction so there is no mistaking the impact it has on the lives of those around the addict. Never does he try to sugarcoat his experience, and he is painfully honest about the ease with which he fell further under the spell. Readers need this–all of us. There is no reader who has not been touched in some way by addiction.

Kempfer’s very real battle with finding his faith is moving to say the least. He allows readers to walk along with him as he sees all sides of religion and hold his hand as he finds his own way. To say his story is stunning is an understatement. To say that it is moving is simply not sufficient. Kempfer’s life is absolutely a miracle and one of which the author is well aware.

I highly recommend Kempfer’s memoir to anyone struggling with addiction or any parent of a child who feels like they are losing the battle to find themselves. Kempfer’s road has been long, filled with the worst kind of potholes, and has nearly killed him, but his story will save someone.