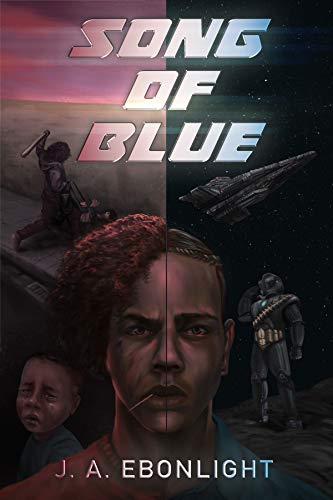 Song Of Blue follows a child soldier trying to survive a brutal far future reality where an ageless king rules thousands of planets. Blu joins the king’s army in an attempt to escape his harsh life and is sent to quell a rebellion off world, where he learns that he has just traded in one gang life for another. Blu is forced to pick a side in a world with no easy choices.

Author J.A. Ebonlight’s uniquely gritty writing style captivated me from the start of this thrilling science fiction novel. This is a fascinating literary hybrid with a storyline I would normally find in contemporary urban fantasy, but set in the far future where humans inhabit thousands of worlds. I detected tones throughout this entertaining story that reminded me of science fiction author Robert A. Heinlein, or another great sicfi writer John Scalzi, with unique views on humanity and deep commentary or society in a compelling and introspective story.

Blu is an intriguing and contemplative character, a bit of a trope, but grounded and endearing enough for me to be fully invested in his character throughout the story. Song of Blue is an ambitious story, edging into the epic science fiction genre with its particular world building, but remaining accessible with its simple but engaging language and dialogue. Author J.A. Ebonlight does a fantastic job of ensuring his characters feel as real as possible, which is important in a far future science fiction story involving aliens, and I appreciated the how easy flowing the dialogue was.

Song of Blue is a riveting space opera that will satisfy any science fiction fan looking for a space marine story that reaches far enough out of the genre to feel new. J.A. Ebonlight provides readers with a unique perspective in a story that is dark, imaginative and thought-provoking.