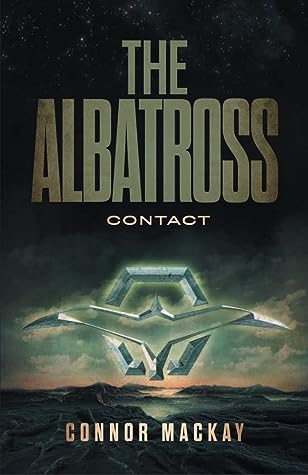 Engaging battles, beautiful science-fiction and otherworldly encounters are what readers will find in the pages of The Albatross: Contact by Connor Mackay. Told in the first person, we learn about new worlds in a future that doesn’t seem that far away from our own. The book is elegantly broken into parts from which each character tells us the story from their viewpoint. The last part combines all three of their riveting story lines with each taking a different chapter within. This difficult, yet wonderfully done tactic keeps this long story fresh and kept me rapt throughout.

Chock full of meticulous world building, intricate character development and intriguing narrative, Mackay easily keeps readers engaged. It’s easy to lose a few readers in the complicated world of science fiction with longer novels, but a reader would be hard-pressed to drop this book. Instead, they’ll get lost in the pages as their curiosity over what has happened to our planet, the people upon it and the people outside of it.

Brimming with humor, action, and the uncertain contact with extra-terrestrial life. There’s something for everyone, so even if science fiction isn’t your preferred genre, you will still find something to love about The Albatross: Contact. The stereo-typical overwhelming feelings when reading older science-fiction just aren’t there. You don’t need a degree to be able to understand what the author is trying to explain to you. Mackay gets that his readers won’t all have technical backgrounds and uses humour and common comparisons to keep readers engaged. This goes a long way to allowing the reader to feel that they are the intended audience, regardless of their reading backgrounds.

The excitement that is built in this first installment of a multi-book series will hopefully carry over to subsequent segments. The Albatross: Contact by Connor Mackay is definitely a book you don’t want to miss out on. If his remaining volumes are anything like this one, he’ll be an author to watch. You can’t help but get drawn in by the beautiful world he creates and get attached to the flawed, yet so human characters within the pages. There is so much to learn about the world that Mackay has created; readers will likely be waiting anxiously for the next book.

The Albatross: Contact is a thrilling science fiction novel. What was the inspiration for the setup to this exciting novel?

Thanks! It’s been a lot of fun writing. I originally came up with the idea for The Albatross Series over a decade ago while working as a wildland firefighter. While not military, there is a similar discipline and grit required for the job. The bond you form with many of your fellow crewmembers is something that I’ve found hard to replicate anywhere else; something I hope comes across in the book. Being a long-time science fiction fan, I looked for ways I could translate my own experiences into an interstellar setting. While a galactic firefighting story was considered, I decided to go with the waaay more original, brutal and complicated war theme instead. I think a bit more universality to it anyway . . . unfortunately.

I’m also a screenwriter and actor, so the first iteration of The Albatross Series was this epic 3 1/2 hour feature screenplay I wrote; a screenplay I always wanted to either direct myself, or kick ass in as an actor. I just want it all, OK?! However, I knew I wanted more space to really flesh out the world, explore the characters, and weave the story, hence diving in and expanding into a novel and series. Finding a way to parallel it with one of my favorite poems, “The Rhyme of the Ancient Mariner” by Coleridge, was a bonus.

I enjoyed the deep world building in your book. What were some themes you felt were important to capture in your universe?

First off let me say again, I love sci-fi: there are so many varied and incredible branches of it. However, I have found there’s a tendency to get lost in the world-building or the actual science of the fiction from time to time. Though I thoroughly enjoyed the world-building, I tried my best to make sure the real eggheady stuff wasn’t too overwhelming and that the characters and their relationships weren’t lost in the universe. An equilibrium. It’s a style I personally enjoy most, and I think the most treasured stories in the genre, old and new, have always found a way to do that. “The Forever War” by Joe Haldeman, “Dune” by Frank Herbert, “Starship Troopers” by Robert A. Heinlein; newer books like the “Old Man’s War” series by John Scalzi, or Pierce Brown’s “Red Rising” books. Hell, the “Harry Potter” books if we dip into fantasy. “Star Wars.” “Star Trek.” We’re entranced by these beautiful and creative worlds, in awe of them, desperate to explore and be a part of them; but we stick around for the people who inhabit them. If you don’t have characters that people feel for, that you really give a shit about, what’s the point? What’s “Dune” without characters like Paul Atreides or Gurney Halleck, “Forever War” without Sgt. Mandella, “Starship Troopers” without Rico, “Old Man’s War” without Jane? Because of this, the most important themes ended up being family, connection, love, duality – The things worth fighting for and struggling against. Nothing new or flashy, but transplanted into something . . . new and flashy. Giants and their shoulders, ya know?

The cast of characters were intriguing and well developed. Who was your favorite character to write for?

The character of Will Reach is about as close to myself as any character I’ve written. Good and bad. Not a facsimile, but similar. I mean, he’s kind of a darkly sarcastic asshole so maybe not entirely like me . . . Anyway, the fun thing about that is being able to really dig into the light and dark as explorations of not only the character, but myself. Dreaming up new ‘what ifs.’ How do I think I would deal in these situations (ideally)? How would I probably screw things up? Each of the three main POV characters are very different from each other, hopefully providing a well-rounded view of this new world, and I love writing each one, but Sarah (oh Sarah, how I love thee) and Arthur are also a lot smarter than Will . . . and by extension me. So, while I enjoy the challenge of writing the others and fully extracting their souls, Will is more natural for me.

This is book one in your Albatross series. What can readers expect in book two, Requiem?

Requiem will crank things up a notch or two. Contact, as the title suggests, is all about the first encounters and setting the stage – with the good guys and the bad. In Requiem, we’ll see the conflict on a much larger scale as our heroes pick up the pieces from the end of Book 1 and become fully embroiled in the war and the mystery of the Forsaken. A new character, who we only glimpsed in Contact, will also be taking the reins for a bit, and establishing herself as a powerful force throughout the rest of the series. My goal was always to leave lots of hidden little Easter eggs in the first book that won’t be fully realized until Book 5; benign clues that mean nothing without context, but along the way and by the time we reach the end of the road, readers will be able to look back and go, “Well, son of a bitch! He hinted at that in Book 1.” So yeah, Requiem will be dark and have some serious shit going on.

IZ – The Saga: Creation by DDWLEM

Visit the Literary Book Award page to see more information on the awards.