A Discussion With A Friend

The Lodgers introduces readers to a wonderful variety of characters that come together in a boarding house in the 50’s. What was the inspiration for the setup to your story?

My inspiration for The Lodgers came from a discussion with a friend of mine who had resided in a similar establishment in London in 1960. He regaled me with the creaking stairs, the shared bathroom and a basin which had a constantly dripping tap. Also living in the lodging house as a permanent resident was an aged army major and also a lady who had been a dancer in the vaudeville shows. Hence the landlady Mabel was created and Arthur became the old army major.

I have always been interested in the plights of unmarried mothers especially the girls spirited away from Ireland so Therese came into being. My interest extends to the World Wars and the terrible repercussions resulting from them. This led to the creation of Ned, his mother and also Judy who is admirably cared for by her recovering alcoholic sister, Irene.

I included the south of France where I have travelled and my own beloved country, the wide brown land of Australia.

I have two more novels due for release: 79 Uxbridge Road and Margaret’s Story. 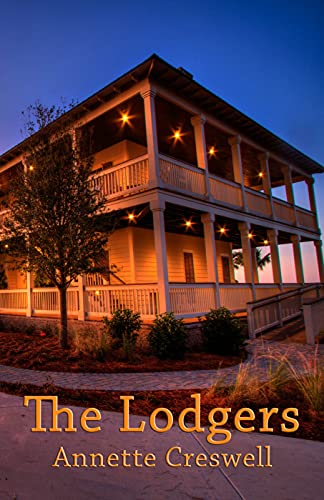 The Lodgers by Annette Creswell is a historical fiction story set in the early 1950’s. Therese O’Brien, a young girl from Dublin Ireland, finds herself pregnant and unwed and she is sent to Brighton England to hide her shame. While her mother tells everyone the story that Therese has gone to London to work in a fancy hotel, in fact she is supposed to stay at a convent until the baby’s birth and then give up her child and return home as though nothing had happened. But Therese wants to make up her own mind about what to do and she takes a room in Mabel Dawson’s lodging house rather than following through on her mother’s plan. Hiding the truth from her family, she struggles to figure out what decision she can live with. Will any of the other lodgers be able to help her determine the right choice?

The residents of the lodging house were an interesting cast of characters, which included Irene, a recovering alcoholic, Irene’s sister Judy, who had not spoken since she suffered a traumatic event and was committed to a mental asylum, Arthur, an old retired army major, Mabel, the landlady who was a former vaudevillian, and a parrot who revealed the true identity of a killer. I liked learning about the various characters’ pasts and the insights that were given in to their thoughts and feelings.

One of my favorite parts of the story was the way that Irene befriended Therese and helped her, and I enjoyed seeing the bond developing between the two women. I also liked seeing what happened to the lodgers after they left the boarding house one by one and moved on with their lives. The author did not leave any unanswered questions at the end of the book, and I enjoyed reading how things turned out for Therese and Irene, who had both suffered through strife in their past.

While I heartily enjoyed this thought-provoking novel, I thought that there were areas with no transitions between scenes, which made these sections of the story feel like there were pieces missing. In contrast, there were areas where there was a repetition of information, with details that had already been revealed through internal dialogue and then repeated again in conversations with other characters. I think the flow of the story would have benefited from the events being retold in a more linear timeline.

The Lodgers is an emotionally resonant novel that follows some intriguing characters. This is a story that will appeal to fans of historical fiction that enjoy a character driven story with a satisfying ending.