J.D. to J.D is a memoir detailing your life journey from juvenile delinquent to becoming a Doctor of Jurisprudence. What was the inspiration that inspired you to capture your story in a book?

I have always been a story teller as a way of connecting to people, young and old, rich or poor. I had a near death experience, took stock of my life’s experiences and thought that my story could potentially be inspirational or motivational to some and entertaining in the process to others.

Looking back on your life now that you wrote this book, do you see anything differently?

I see a greater ability for people to change over time in the right setting. I never realized how much I changed from my youth through adulthood until I juxtaposed my numerous juvenile indiscretions against my later life accomplishments. We often pigeon hole people and now I tend to do that less and realize that many people have untapped resources and can become assets to society rather than impediments.

I found your book inspiring as well as entertaining. What do you hope readers take away from your book?

People who make mistakes can learn from them, mature and change over time.

What is one piece of advice that you wish someone had given to you when you were younger?

Take less “stupid pills” and think about the future without simply living for the moment. 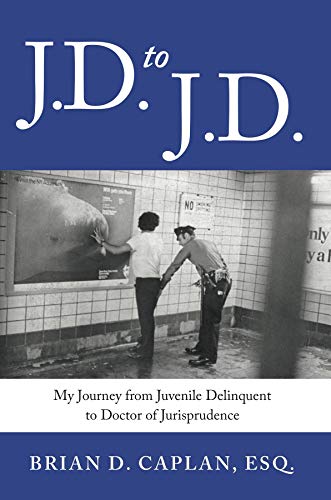 In this funny and insightful memoir, Brian Caplan takes us on his journey from a reckless and self-centered juvenile delinquent to a respected and empathetic member of the legal profession. Brian recalls his early days of shockingly poor judgment and shares how he learned from his experiences to make the seemingly insurmountable leap from first being arrested at age twelve, to today representing some of the bigger names in the entertainment industry as a prominent litigator.

Growing up in the center of gritty 1970s New York City, Brian was on a troubled path, destined to fade into oblivion or end up in jail or worse. Brian eventually found his way; a born risk-taker, Brian capitalized on a few lucky opportunities that came to him and parlayed them into a fulfilling career far removed from his childhood fate. In this tale of redemption and second chances, Brian shares the lessons he learned during his journey, infusing optimism and a sense of hope to all those who hear his story.

Brian was born to parents who were ill-equipped to raise a child having been brought up in dysfunctional families themselves. At 10, his parents separated, leaving Brian with his mother whose life was plagued by the two-headed beast of depression and the search for a new romantic partner. The debilitating partnership between Brian’s morally-impoverished upbringing and the environments he grew up in set the boy on a path of self-destruction paved with depravities ranging from substance abuse to compulsive gambling, womanizing and a general lackadaisical attitude. Would a way back present itself or would Brian get lost on this path?

J.D to J.D by Brian D. Caplan is a memoir detailing the trajectory of the author’s life from childhood up to adulthood (the 70’s to the 2000’s). Caplan gives us more than a peek into his life. What he presents is a detailed chronicle of how he went from being a juvenile delinquent who was first arrested at the age of twelve to being a doctor of jurisprudence who enjoyed a productive career in law.

Caplan’s posture reveals that of deep introspection as he takes us through his topsy-turvy journey to redemption. He makes plain his grandest and littlest misadventures while pulling out valuable lessons along the way. For instance, he testified that some of his mischievous forays fitted him with skills that later came in handy as he began building a life for himself. This is a testament to the fact that in every cloud, there’s a silver lining or good things could come out of bad things.

I could also pick out other lessons using Caplan’s life as a reference point like the fact that if we looked closely, we would get to, as he puts it, “a fork in the road”, where life presents us with the opportunity to live differently. And we are to take this “fork in the road” and change our lives because we are lucky to have it and we may never encounter another chance. It sounds simple but it’s quite profound if you ask me. There’s also a section where Caplan lists the life lessons that guide him, which I loved. Although I enjoyed the book, I thought the experiences could have been arranged chronologically to make the book an easier read.

While I found Caplan’s lessons worth keeping, I was more enamoured by his impressive storytelling skills and humour which turns what would have been a dour narration of his experiences into a colourful and engaging one. It’s one thing to have a great story to tell, it’s another to tell it well and keep readers engrossed and Caplan excelled at this. I liked how he exposed us to his thrilling adventures as a lawyer in the entertainment industry and his encounters with various celebrities he represented. You’ll love many of the tales! If you love memoirs with a mix of thrilling accounts and deep themes then you’ll enjoy this book.