Wind Across the Prairie 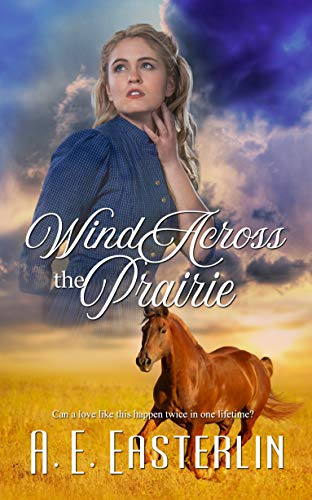 I’m a sucker for a good country romance and Wind Across the Prairie is exactly that! I think that A.E. Easterlin did a great job with description. She either did very thorough research or has firsthand knowledge of ranch life. I liked that the author mentioned things like the bunkhouse where the cowhands stay, the wash stations, knowing when to move the cattle to a different pasture for the seasons, readying the garden for the seasons, etc. Things like that really made me feel like I was back in those times as a guest on the ranch.

I loved each of the characters, even the gunslinger. Robert was a bit too clingy for my liking, but it made sense for the story so I didn’t have a problem with it. I guessed the villain fairly easily after being introduced to all of the characters, but I still loved the execution of the book and the way the author pointed fingers at the obvious suspects. I also loved that I could feel how much Hannah loved Jared and how grief-stricken she was over his loss. I’m glad she didn’t cave in right away to Colt because that might have made me think less of her. I also enjoyed the boys picking on Colt about Hannah and his obvious crush on her.

I did get confused twice. The first was when the prologue has Colt in it and then jumping to Chapter One Hannah is grieving at her husband Jared’s grave. Shortly after though everything made sense so it wasn’t a big deal, but it did cause me to question if I had missed something. I thought the prologue was captivating and intriguing though. The second time that I got confused was about Uncle Parsons. I didn’t recall him being mentioned at the beginning of the book, but towards the end of the book, he’s mentioned quite a bit and is an important character, so I was confused about his appearance in the story since I didn’t remember him being mentioned prior. There’s a point where the bad guy is thinking to himself and he’s thinking about the ‘old man’ he murdered and that’s when I began questioning who the ‘old man’ was because Gus was alive and well.

Altogether though I think this was a great read and I would definitely recommend it to my friends. I loved Colt, I have a cowboy friend that calls me ‘darlin’ and it always makes me swoon so I, of course, swooned for Colt, haha. I would have liked to have read some more about Jim. Hopefully, he and Hannah’s other cowhands find love in the future. I would have liked to read some more about Wes too. I love the ‘seems cold-hearted but is a softy on the inside cowboys’ so Bridges was one of my favorite characters so I’d like to read a story about him. The only thing that really bothered me about this story is how often the men talk about how much Hannah has gone through and how strong, brave, stubborn and hardheaded she is. It felt repetitive to me, but it didn’t really take away from me enjoying the story. Props to the author, great job! Oh, also I would have liked to know where the ranch names came from for Hannah, Wes and Robert’s lands.

Tags: A. E. Easterlin, Wind Across the Prairie