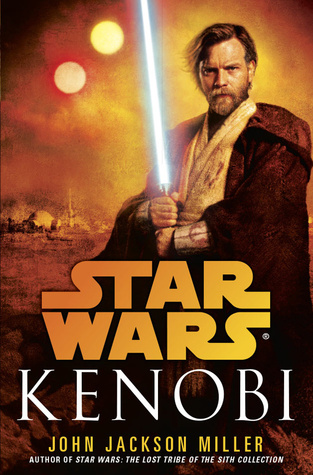 With the death of Anakin Skywalker, the destruction of the Jedi order and the rise of the Empire, Kenobi goes to Tatooine to protect Luke Skywalker, but this is not the story the book follows. This is the story of a lonely shop owner in the middle of the Tatooine desert that is bored of serving moisture farmers and subconsciously wants more from her life; enter Kenobi, or crazy Ben Kenobi as the farmers soon call him. He comes at a time when all their lives are poised for change. Sand People are attacking in force threatening the farmer’s life and property. The farmers respond by contributing to a protection fund that is essentially an army called the Settlers Call. Bu the Settlers Call is a pretense for a criminal enterprise with ties to Jaba the Hutt. No matter the outcome, everyone’s lives will be changed and Kenobi is called on once again to be the hero.

Kenobi is such an interesting, intrepid character with a thrilling and traumatic back story. It’s hard to go wrong with such a protagonist. The book it titled Kenobi, which leads you to believe that this is who the story is about, but you would be wrong. The book should be titled Annileen, the lonely yet dutiful shopkeep. The book follows her for more than half the story along with a few other characters. Most of Kenobi’s parts come in when he’s meditating, trying to talk to the ghost of Qui-Gon Jinn and reflecting on his daily actions. He reluctantly interacts with Annileen where a brooding and haunted Kenobi is revealed. The most action you get from him is when he fights a krayt dragon at the end of the story and eventually saves the day. The ending of the story is bitter sweet, but the story overall is a weak reflection of the Anakin story from episode 3 where Anakin turns to the dark side, has a chance to turn back, but doesn’t. I have absolutely no complaints about the writing. John Jackson Miller is a great writer and a veteran contributor to the Star Wars universe. All of my complaints come from the overtly pedestrian story. Especially coming out of episode 3 where huge galaxy wide changes were taking place. It’s possible a point was being made as to the relative importance of one’s life or actions, but the point was not weighty enough to carry an entire story about a character such as Kenobi. I would recommend this book to fans of the Star Wars universe, as it gives you that glimpse into Kenobi’s life when he arrives on Tatooine, but be ware; it’s mundane.