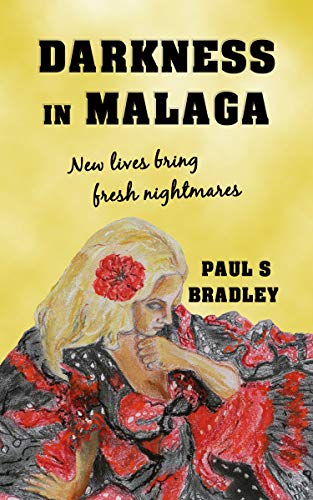 Paul S. Bradley in his book, Darkness in Malaga, has spelled out the extent to which evil people are willing to go to satisfy their dark desires. To make other people suffer and dehumanize them. To surgically cut out the word human from human-being. The book sets out with an innocent sixteen-year-old girl being confronted by a hurdle that you would expect a child at her age to encounter- a boy asking her to be his girlfriend. At this point Paul has me fooled that this is a ‘young- adult’ romance novel where the tall handsome boy asking the girl out will, on a new moon, transmute into a smelly werewolf. Wrong. A few minutes later she is bundled into a white van and abducted- and this is where the story begins.

The plot that Paul has employed in Darkness in Malaga is a show of pure mastery. Half the time I was reading the book, I felt like I was riding a roller coaster. I couldn’t predict where the next chapter would take me or who the next chapter was about. Right after Angelika is abducted on her way out of school, I find myself in Morocco with Karim and Mohammed, two brothers in the seemingly lucrative business of smuggling Africans looking for greener pastures, into Spain. On this night, among the people they bundle into their Spain bound inflatable rubber dinghy is a heavily pregnant girl. Paul uses this secondary character to introduce us to, Amanda, a star character, when she assists the girl when she prematurely gives birth on a patrol boat that arrests their dingy. Amanda had boarded the boat to document the arrest of illegal immigrants.

The author takes his time to develop the story of each character in the book. He describes them in depth. He does not shy from derogating from the main plot of the narrative to tell a story about the main characters; Phillip, Prado and Amanda. He does this at the risk of building too many branches in the ‘tree’ which might lose the reader. However, considering the fact that this is his first book in a series, the Andalusian Mystery Series, and we might meet these characters in the other books, the digression is well deserved. We get to know that Phillip was madly infatuated with Juliet, the waitress, because she reminded him of his ex-wife. His love for her leads him to tirelessly work with Amanda and Pardo to rescue her and other girls from the clutches of evil Duffy and his accomplices before they are raped on camera. Amanda, a CNN investigative reporter and successful woman in her own rights, is yet to find love until fate brings her Phillip. All their stories are expertly interwoven to bring forth a story of love, hope and light in a rather dark Malaga. This is an action-filled book with pin point twists and turns that will keep you on the edge of your seat from the beginning to the end.