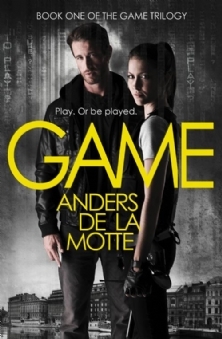 ‘The game’, as it’s called in the book, gives egocentric narcissists with impulse control issues something to do with their free time. It’s a game with real world consequences and real world rewards. HP is a recent inductee into the game and quickly finds himself the center of attention for his criminal exploits done in the name of the game. But one rule of the game, like Fight Club, is you don’t talk about the game. When HP breaks the rule he becomes the target of other players that are trying to come up through the ranks. To stay alive HP has to separate fact from game fiction. He starts seeing the tentacles of the game all around him. The game is everywhere, the game is everyone; you are either a player or a pawn.

There are two main characters in the book; HP and his sister Rebecca. HP is the stand out character in the novel, someone you love to hate for his selfish and arrogant ways, but his love for his sister grounds him and spotlights his humanity. Most of the entertainment in the book surrounds HP and his work for or against the game. Rebecca’s character seems to serve the purpose of telling the families tragic back story, and in these instances the novel seems to suffer from slow uninteresting story telling. Even the moments where Rebecca is not lamenting her past she’s stuck describing her ordinary encounters at work or at home. Her story is interesting only in those rare moments where her story intersects with HP’s. The only reason why I gave this a rating of 3 out of 5 is because Rebecca’s story takes up about half the book. On the other hand there’s HP: smart, witty, resourceful and generally a jerk. His story is really the backbone of the novel. He’s uncovering secrets of the rich and powerful, evading the police, vandalizing, fighting, terrorizing and running for his life all in the name of the game.

The book is a translation from a Swedish book called, Geim. I didn’t see any hiccups in the translation. Dialogue seemed a bit awkward at times, but I doubt that’s due to translation issues. One thing was odd for a Swedish book; there was a lot of references to US culture and locations. I wonder if these were inserted for an American audience or if it was in the book the whole time and my world views are just very limited or depreciating to the US, lol.