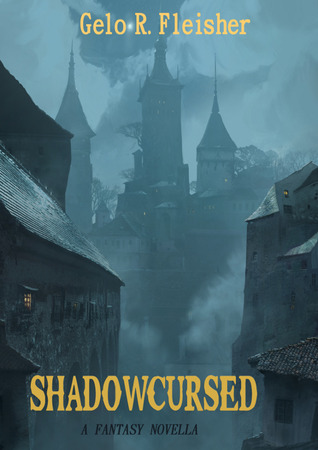 Bolen is an aging thief in an ancient city where the Mad King rules with an iron fist. Bolen takes on a job to bring in some money. To him the job is like any other, but what he finds reveals a dark truth about the city he’s come to know and the Mad King everyone has come to fear. As Bolen spirals into depression he is perilously thrust into the maw of a war between the Mad King and a mage that has secretly ruled the city for centuries.

You know a book is good if you get to the end and you’re sad to see that there are no more pages to read. Shadowcursed is a short book, about one hundred pages. The character of Bolen is well developed, at least as far as his inner turmoil is concerned. He’s a thief, so he spends his time climbing up buildings and leaping across rooftops, which is bad if your knees are shot and your muscles aren’t what they used to be. Bolen’s rooftop antics remind me of games like Thief and Assassins creed. While the character and his motives were fairly straightforward I was confused by the purpose of the statue that Bolen steals and the reason why everyone wants it. The reasons were explained, but they seemed to be conflicting at times. There’s a setup in the book for the larger story to unfold through the series and in the book were given hints of this larger world which seems to be full of ancient gods and cursed magics.