← Mother of Freedom: Mumbet and the Roots of Abolition
The Eternal Truths of God →

Unglued: The Book of Strafe 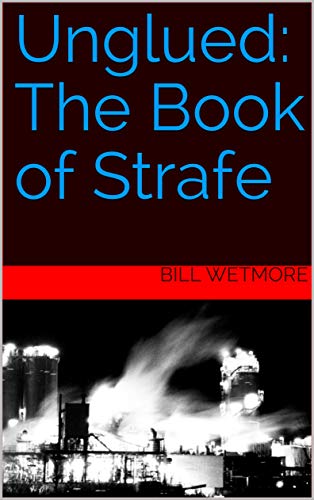 After college, Strafe’s life was pretty aimless. Living in his mother’s basement and trying to discover what his ambitions might be, he gave a perpetual half hearted attempt to find some kind of path he could follow. Only after landing an unlikely job at the local glue factory did Strafe’s life finally begin to take some direction. Suddenly he had a steady paycheck, a new found interest in Zen Buddhism, a creative spark he never knew he held, and an artist girlfriend he never expected to have, all while navigating the world inside the American Starch and Adhesives Company.

Unglued- The Book of Strafe, by Bill Wetmore, follows a compelling main character as he navigates a seemingly lackluster life while also cleverly illustrating how it can often be equal parts absurd and enlightening. From the first few sentences, it’s clear the book has a wildly tongue-in-cheek tone as Peter Caldwell Strafe explains, in no uncertain terms, his hatred of his first name. The ridiculousness increases from there, and although the first few chapters read like vaguely related short stories, they quickly gel together to create a more linear story. The Glue Factory, as it is affectionately known among the locals, stands as an entire character itself, with its inhabitants serving as the inspiration for many of Strafe’s own short story ideas. Despite his rocky start and apparent complete lack of effort, we watch Strafe grow and mature as a person over the course of time. By applying the laws of Zen Buddhism to his everyday life, he eventually becomes a self sufficient adult, separating himself from the turmoil and eccentricity that surrounds him most days. The snapshot of late 1970s suburbia is an added bonus of the book, and while it doesn’t play a huge part, it’s enough to add a layer of atmosphere that is indispensable overall.

If Unglued has a theme, I think it’s that of personal growth. Strafe begins the book an adult, but lacking any of the responsibilities that come with that distinction. By its conclusion, he has become a completely different person. As each new day brings another surprise, Strafe learns to adapt and appreciate all the things he never paid much attention to in the past.

Unglued was fun from beginning to end, and once it found a rhythm, it never slowed its pace. The book dealt with some serious issues in very lighthearted ways that made it an incredibly easy and enjoyable read. While it may be too far on the absurdity spectrum for some, I found it absolutely perfect!

← Mother of Freedom: Mumbet and the Roots of Abolition
The Eternal Truths of God →