← How the heroic Irish won the American Revolution remembered this Patriot’s Day
Honeycake: A Circle of Trust → 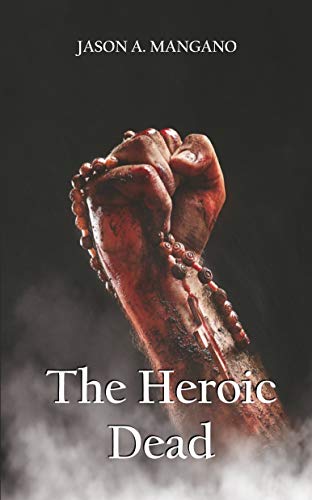 The Heroic Dead, by Jason A. Mangano, is a riveting tale detailing the levels to which human beings are capable of reaching when their existence is threatened. It is a thought provoking read which raises philosophical questions of morality in an uncanny form of an action filled, well written story. The tale begins on a cold night, minutes to the unveiling of a new year at New York’s Times Square. Thrill seekers and revelers are deeply engrossed in a countdown, entranced by the dropping ball that signals the start of a new year, while, unbeknownst to them, a terrorist is about to terminate their lives on the turn of the new year. In the war that follows this heinous act of terror, American scientists develop a serum in order to tip the scales of balance in their favor, which turns their dead soldiers into mindless creatures that decimate everything in their path- including children!

The author uses powerfully descriptive and colorful language to create a vivid image in the reader’s mind. I was immediately captivated by the first paragraph of the first chapter. As he describes how the agent of Al-Sirat works his way in the crowd I could feel the cold December air and the buzz of excitement. I could clearly see the Al-Sirat agent’s sweaty face enshrouded in a mask of mad determination as he savagely clicks the killer button.

The paragraphs are short and concise. Mangano has perfected the art of craftily loading the paragraphs with just enough ideas- with each paragraph carrying bits and pieces of the story he is telling. This in turn made me want to keep turning the pages, paragraph after paragraph to see where the story goes. The plot in the story has been masterfully built up to slowly guide the reader to the crescendo of the tale. This makes the read quite enjoyable.  However, while reading chapter 5, I felt that the author ought to have put that part of the story at the beginning, immediately after the bombing at the Times Square to ensure that there is fluidity in the story’s plot. The composition of the text is grammatically correct save for a few errors. For instance, where he writes ‘it was done on live TV while the world was watched,’ instead of, ’It was done on live TV while the world watched.’

These are small issues in an otherwise fully entertaining story. The author has masterfully narrated an interesting story and answered the question, ‘Does the end justify the means?’ I would recommend this book to any reader as a captivating and unique read.

← How the heroic Irish won the American Revolution remembered this Patriot’s Day
Honeycake: A Circle of Trust →