← The Jailbird’s Jackpot
The Touring Pro: A Person of Interest → 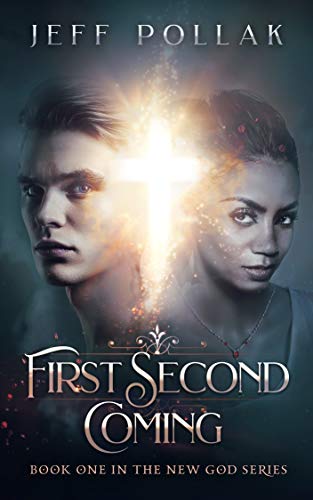 In the First Second Coming God retires after more than 2000 years of taking care of the Milky Way Galaxy, Inc. The new God must decide whether Earth’s dominant species should or should not be included in his plan to bring the planet back into compliance with Milky Way Galaxy, Inc. The new God introduces himself on a talk show. Co-hosts of the show, Ram Forrester and Brendali Santamaria, are nominated to attend the conference by the new God. Brendali,  who is a catholic, and Ram, who is an atheist, are both shocked to learn of a sixty-day conference in Los Angeles to determine if human beings are capable of helping God Implement his planetary turnaround plan. This is the start of Ram and Brendali’s romance and their thrilling adventure to save humankind.

First Second Coming has a fascinating premise that builds up in effortless fashion. I absolutely adored reading about Brendali and Ram and seeing how their relationship evolves. Even though they had different beliefs they were able to put aside their differences and work together. Jeff Pollak does a fantastic job of creating characters that are both unique and relatable. This combination gives us a relationship that is engrossing and believable. While I had some preconceived notions that this was going to be a religious romance book, those notions were quickly dashed as this is much more of a thrilling romantic fantasy that is used as a vehicle to explore faith and humanity. The story provides a sixty day deadline which works to its advantage because the story is propelled forward from that point on. It takes a talented writer to create characters you care about in a plot that makes sense all while going a breakneck speed. First Second Coming is a captivating adventure novel that touches on some deep themes while never forgetting to entertain readers with a bit of romance and a touch of humor along the way.

← The Jailbird’s Jackpot
The Touring Pro: A Person of Interest →