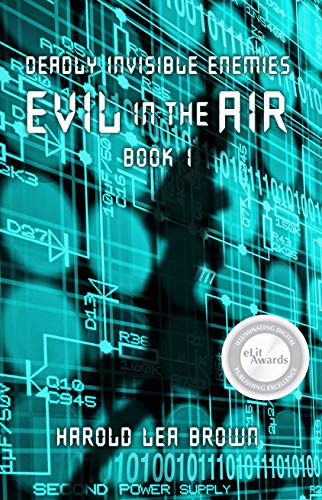 Deadly Invisible Enemies: (Evil in the Air) is the first entry in Harold Lea Brown’s riveting technothriller Deadly Invisible Enemies series. Kevin Albright is a well-known Cyber technology security expert whose life is finally going according to plan. Happily married for 10 years and blessed with a son. Until an upcoming hidden cyber domain operated by a criminal mastermind got him on their radar and his wife and son are murdered on their tenth wedding anniversary due to a security breach at the highest government levels. Albright smells foul play in the Department of Justice when the FBI tells him the person matching the murder suspect’s description died a few years ago. He vows to get the killer at all costs. Since he cannot rely on the corrupt FBI and CSI who have resorted to selling the state’s secrets internationally for personal gains, he sets out on a dangerous mission. His pursuit takes him deep into a dark cyber underworld where the internet has been weaponized.

Harold Lea Brown rivetingly explores the effect of technology on people with a thoroughly entertaining storyline propped up by engaging writing. The story reminds of the The Matrix in some ways, with its almost cerebral like approach to tech vs humanity, with a bit of the movie Hackers with its gritty storytelling that ultimately relies on intriguing characters to drag you deep into this complex world.

The book explores how cybercrimes might end up being more dangerous compared to other crimes, and this stark contrast is peppered with twists in nearly every chapter, and a kind of edge of your seat storytelling that gave me a bit of anxiety. I have to say the emotional exploitation and evil portrayed in the book helps in making the characters seem more real, if not relatable to readers. There is some extensive use of monologues and dialogues throughout the book, but I felt that this helped build a connection with the characters and set the stage for some interesting scenes. The book is extremely detailed, ensuring that readers will understand every bit of this novel.

Evil in the Air by Harold Lea Brown is a thrilling cyberpunk novel that is sure to captivate readers and is a fun start to an action packed series.