SECRETS HAVE DEADLY CONSEQUENCES, ESPECIALLY IN A DIGITAL WORLD.

What if all things that happen in life—good and evil—are not random or coincidence, but really intentional cyber events? Kevin Albright is relocated to a foreign country, with a new identity. Trapped between the living and the dead, he’s a lone wolf left to fight evil global cyber forces, and his past life demons, alone. His unrelenting search for the truth about what really happened to his family puts him on a collision course with enemies from his past as he uncovers a plot that will bring world superpowers to their knees.

With no home country and uncertainty about whom he can trust, Kevin develops an elaborate plan to catch the deadly invisible enemies and stop their planned attack. As his plan unfolds, on the dark side of the World Wide Web, he learns the full scale of evil’s resurrection—the reach and power of the Internet places the fate of ten percent of the world’s population and seven world leaders in his hands. With the minutes counting down he unleashes a “cyber rendition,” luring evil into his world and putting himself in its cross-hairs.

Evil Resurrection follows a hacker who uncovers a plot against world superpowers and in so doing puts himself in the crosshairs of dangerous people. What was the inspiration for the setup to this thrilling novel?

I originally started the story as a miniseries teleplay, but I realized that it had all the makings of a great techno-thriller novel series.

The story series evolved from an idea about how reliant the world has become on access to, and use of, technology. For me the big question is, “What do people really know about the power of the smartphone they are holding in their hands?” It is a powerful handheld computer—a device that is millions of times more powerful than all of NASA’s combined computing power used when NASA first landed a man on the moon.

In 1991 the world wide web went live. It was a non-event, except for large corporations. iPhones did not appear until 2007. World leaders and governments continue to struggle with the Internet and technology which has leapfrogged their ability to protect national security. The premise of the series is that we live in an uninformed world, lulled into a false sense of security that is “blindly” making the leap of faith, sharing and storing their deepest secrets in electronic vaults—available to anyone with tech savvy. Now add in a reality that the global cyber infrastructure security has not kept pace, with technology dating back to the 1970’s still in use. The internet had not even been contemplated.

Kevin is an interesting character that I enjoyed following. What were some sources that informed his character development?

Kevin is a composite of people I have met, both in work and personal settings. And as with all my writing, my personal life experiences also inform Kevin’s character. In that regard I have worked at the most senior levels of government and private organizations, leading a variety of job portfolios, including technology, access to information, threat assessment, strategic planning and policy development, for organizations engaged in a variety of business lines, including energy, infrastructure, computer networks and data centers… all of which inform my writing.

I wanted to tell an entertaining, on the edge of your chair, eerie story. I also wanted it to be a cautionary tale that informs public debate and educates people using smartphones, the internet and social media. Ideally, anyone who reads the Deadly Invisible Enemies series, will have a new or more informed respect for the limitations of their smartphone and the hairs on the back of their neck will rise when ever their smartphone rings, “CALLER UNKNOWN.” Or, a smartphone text message, “BIG D wants to be friends with you.”

This is book three in your Deadly Invisible Enemies series. What can readers expect in book four?

In Deadly Invisible Enemies: Truth About Evil (Book 4), as a secret organization with highly placed players plots to change the course of global history from cyberspace, the circle of people who know Kevin is alive widens. Some want his skill set, others want him dead. Kevin Albright’s search for the truth about what really happened to his family is taken to a new level, as Kevin learns who the real target was. The more Kevin digs, the more the mystery around the role played by various global business interests and government agencies deepens, with a growing list of evil forces masquerading as good.

The closer Kevin gets to keeping the promise he made to his wife—the closer he comes to dying. 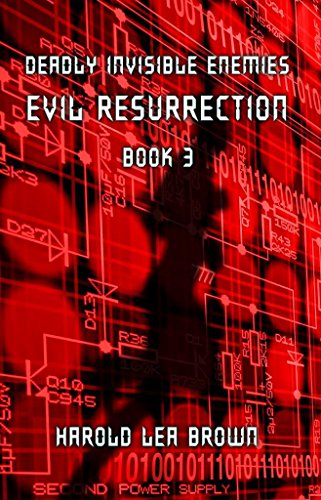 Cybersecurity expert Kevin Albright is living a shadow life. After foiling a potentially catastrophic plot to detonate a 1000-mile oil pipeline and seeing his family life torn to shreds, Albright is forced to flee his country, leaving behind his identity, his friends, and a trail of international criminals hell-bent on killing the man who ruined their plans.

But Josh Burke – Kevin’s new alias – cannot leave his past life behind. Haunted by the memories of the destruction of his family and obsessed with bringing the perpetrators to justice, Burke uses his new job as a technician at a small town internet service provider to search the web for clues – only to find himself embroiled in yet another plot to hack and attack critical infrastructure around the world.

The third book in Harold Lea Brown’s Deadly Invisible Enemy series, Evil Resurrection is a thrilling glimpse into the hidden realm of dark web hackers and the government agencies involved in bringing them to justice. The majority of the story is seen through the eyes of two main characters – amateur spy Kevin Albright and former gangster Big D, and it also brings a whole ensemble of players into the digital chess game unfolding in real-time.

The plot is an intricate and twisting web, that will have you flicking back to previous chapters, in an attempt to join the dots as the layered network of characters and events grows larger and larger. Although the concepts involved are highly technical, the reader is never left behind; the complexities of computer hacking are explained clearly without being patronizing. While this does leave some of the ‘explanation’ dialogue feeling a tad clunky, with conversations between the characters slightly forced in to explain some of the more tricky parts of computer hacking, it is also a fascinating insight into the ever expanding invisible world that oversees more and more of our daily lives.

The story moves at lighting pace, with short easy to digest chapters jumping from location to location and character to character. A slight criticism is that this constant fast pace somewhat takes away from the climactic ending – when all the strands of the story begin to come together, there’s no space left to move the suspense and drama up a notch for the climax.

Evil Resurrection is a highly enjoyable read with twists and turns aplenty. The characters are real and relatable and will leave you wishing you had the lightning fingers of a ‘white hat’ computer hacker – or even the lavish life of a cigar-smoking, cognac-sipping crime lord. As soon as the last page is turned you will be eagerly looking toward the next instalment in the Deadly Invisible Enemies series.