The Mission to End Slavery 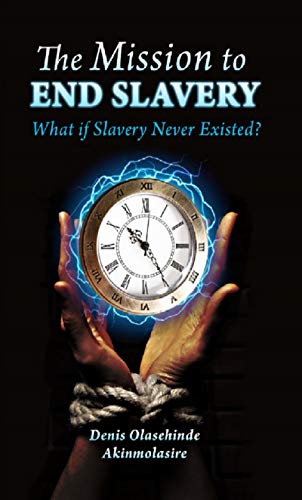 The Mission to End Slavery by Denis Olasehinde Akinmolasire is a book that asks an important question. What if slavery never existed? How would it affect our world? Femi Adebayo has fought long and hard over the idea that black people’s lives are more challenging than anyone else. When he crosses paths with Mr. Diggity, who makes an impossible offer to him. Femi is taken back in time to a time when slavery existed. He is forced to watch the brutality of slavery and it’s toll on humanity. Believing he can stop it, Femi set out on a mission to end slavery.

Denis Olasehinde Akinmolasire has created a bold story centered around a thought-provoking question that is alluring yet out of reach. In this novel Akinmolasire is able to pose many moral questions using historic context, along with the idea that no matter what has happened, we can not change it. History is important. Good or bad, ugly or beautiful, it brings us together through a shared experience. I felt like this novel invites the reader to take part in controversial topics and see it from a new perspective.

I liked Femi’s character arc, although he didn’t stand out in the beginning of the story, overtime his character began to grow on me. He is living in the modern world and claims that racism still exists. As I was reading all his rants at the beginning of the novel, and we get to understand how he feel about the way he was treated, I kept telling mentally him, ‘It was a part of history!’ And at this moment I realized how engaged I was with this novel.

The Mission to End Slavery is a well-written and compelling work of fiction. This could be considered science fiction due to the time travel elements, but I think of this book as more of a historical and philosophical work of fiction that presents provocative questions and explores unknowable answers. I enjoyed the detailed and well researched historical events that supplemented the story. The novel was slow to start but I was glued to the page when Femi went back in time and was face to face with the Yoruba tribe.

I enjoyed reading The Mission to End Slavery as the emotions were palpable and the characters were believable. It was an eyeopening read that left me with many questions to reflect on.