← A Curiosity for the Unknown
Close to Impossible →

Saving Time follows two unlikely companions who must band together to save Scotland from a nuclear threat. What were some driving ideals behind this story’s development?

Rory is the son of Scott and Caitlin (Stolen Time: Community Chronicles Book 2) and is an emerging leader in a community of survivors founded by his parents. He is the head of his Militia team. Siobhan has grown up in the Scottish Government underground Bunker. She is a child of a scientist member of the Brains Trust, the group of specialists seconded to the Bunker when the world’s situation spiralled downwards after the Stock Market Crash forty-odd years previously. Plus, her team of scientists, technicians and Scottish Defence Force personnel.

These characters, and their respective communities, come from different worlds and have lived under the impression that their ideologies, types of governance, and lifestyles will be at odds. But they find out that they can and, indeed they must, co-operate for the safety of Scotland.

In so doing, they discover they are more aligned and alike than they had been led to believe. Those members of the teams involved, who had previous apprehensions regarding their need to co-operate, find that, with a little effort, they can. But not all are open to this, which causes more problems and threatens the success of the endeavors of the combined team.

I hoped to show that when people put their prejudices, preconceptions, and personal agendas aside they can cooperate and combine their efforts for the common good. And maybe even find something precious along the way, such as acceptance, a unity in common purpose, and even love.

Your characters are methodically and deeply developed. What is your writing process like to bring these characters to life?

I follow loosely the method of character creation outlined by Jeff Gerke in his book Plot Versus Character (2010. Writer’s Digest Books). Donkey was right, we are onions, and I develop my characters a layer at a time beginning with personality type as defined by the Myers-Briggs model. Then I work through the layers including physical appearance, back story etc. and, of course, their internal knot—their inner issue they will be forced to deal with during the course of the story.

For example, Rory is closest to an ISTJ, a sentinel type with defender/protective tendencies. He has a strong sense of responsibility and great loyalty to his family and Community. He struggles with his father’s death and is driven by the need to emulate the hero-figure status of his father. Well, I’ll let readers find out for themselves how that pans out.

What were some new ideas you wanted to explore in this book that were different from the first two books in the Community Chronicles?

I wanted to explore the beginnings of restoration. It is over forty years since the world descended into a dystopian chaos after The Stock Market Crash, and now a hitherto silent government is preparing to go up top and govern the country once more. The situation of a leaking nuclear war head on an abandoned submarine from a rogue state is the catalyst, but is Scotland, and indeed its underground government, ready for it?

What about those who have managed by themselves in this changed world without its leadership or intervention? How will the government diplomatically endeavour to connect with a people who have felt abandoned by them for the past forty years?

I wanted to explore the effects time travel may have on a human. Rory has made the journey to the past previously and does so again in this story. How has it changed him? Does he now have a special relationship with linear time?

Rory has a very different view of time travel than his father, Scott. Rory strongly believes the Time Machine should not be used for personal gain or manipulation and is determined it never will. His greatest fear is that the government will discover its existence.

I cannot wait to read book four in the Community Chronicles series. Where will book four pickup and when will it be available?

I’m so pleased you can’t wait to read Restoring Time. It picks up immediately from Saving Time with Rory desperate to bring Siobhan home. There is plenty of action, more time travel, and we meet once more Derrick Lloyd, from The Crash: Community Chronicles Book 1. All I will say is age has not softened him any.

I’m endeavoring to have this book published by the end of the year. 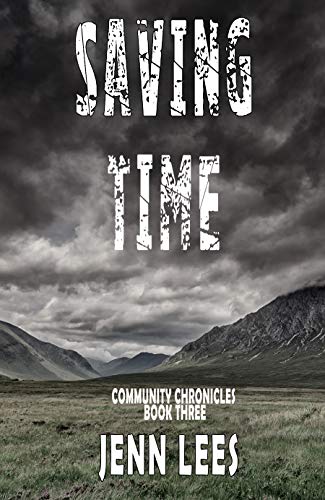 Could a chance meeting in the past, and a vision belonging to the future, be part of the same timeline?

2061, forty-three years after the stock market disaster which changed the world.

Rory, Militia man and son of Caitlin and Scott Campbell, lives in a self-governed Community that exists independently from the Scottish Government.

Nuclear physicist, Siobhan Kensington-Wallace, has lived underground in the Scottish Government Bunker since the Crash. Along with the other children of the Brains Trust, she has been brought up to believe they are the elite who will bring restoration to Scotland.

Their opposing worlds collide when Rory discovers a submarine leaking radiation into a sea loch in the North Western Highlands. Forced to work together to save Scotland from annihilation, Rory and Siobhan discover more is at stake than neutralizing the current nuclear threat.

Will their attraction cause fallout of another kind…or will their allegiances divide them forever?

← A Curiosity for the Unknown
Close to Impossible →