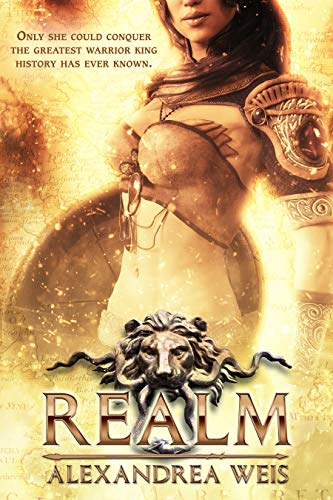 Realm familiarizes the reader with another side of Alexander the Great that not many are familiar with. Alexander the Great is viewed as a conqueror and a hero in the mainstream world. The concentration is often placed on his triumphs, while his weaknesses are almost always overlooked. Realm exposes you to more than the basic history of Greek Kingdoms. The Greek icon makes a good part of the plot but the main focus is on Roxana.

Roxana is something akin to the girl next door in modern-day times. Leading a simple life dedicated to her family. Roxana’s father was a chieftain, which earned him some level of respect. After Alexander invades her home, and the Greek conqueror tries to get acquainted with her father, Roxana meets Alexander the Great.

The author is able to artistically develop each character so that you can easily empathize with them. The character development in this story is something that I truly appreciated as they all continue to change and develop as the story progresses. Alexandrea Weis’s characters are intriguingly diverse and meticulously developed.

Roxana was a beauty that was admired in her homeland. That is one of the many things that attracts Alexander to her. Her beauty aside, Roxana is dynamic and posses an emotional depth that I rarely see in characters. She was of mixed race, something that was not common. Alexander ultimately took Roxana as his wife despite the girl being against the idea of leaving her family behind. The book is fascinating to follow as one not only enjoys reading about ancient Greek history but we’re also treated to a view of ancient life from a perspective that is not often explored. I was not ready for the turbulence that would accompany Roxana after the marriage. Realm is an emotional roller coaster that is both raw and engaging.

One could feel the bride’s emotions through Alexandrea Weis narration. We hear about Alexander’s other women, Roxana’s struggles as she tries to keep up with her husband’s status especially during battles, and dealing with her self-esteem. Even with the challenges in the marriage, one could still see that Alexander the Great loved his wife. I loved that trait in him. Through Roxana, we see how impactful the strength of a woman can be. The girl from Persia had a few moments where she seemed to be falling off but pushed on and beat all odds. I appreciate the author’s portrayal of women in the book. Morella was among the most captivating characters in Realm. I enjoyed reading Realm and would recommend it to readers who enjoy well developed historical fiction with heart-wrenching romance.