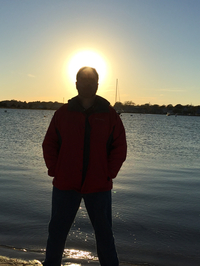 The Mendelian Protocol starts with two genetic researchers dead on a beach which begins a deep and twisting mystery. What was the inspiration for the setup to this intriguing novel?

I wrote the novel many years ago. I was initially inspired by the X-files as well as my interest in the premedical classes I was taking in genetics and molecular biology. I eventually tried to incorporate an element of classic murder mystery as well.

Natalie is an intriguing and well developed character. What were some ideas you wanted to explore with her character?

I basically saw her as the young physician (which I was at the time) who found herself pitted against an imperfect system. This is represented by her boss, the chief, who keeps trying to steer her investigation in the direction he wants it to go.

I enjoyed the mystery at the heart of this novel. Did you plan this out or did it develop organically while writing?

I literally wrote about 100 pages without any plan whatsoever and then eventually realized I had to come up with a plot. It took me weeks or even months to develop an original plot that I can honestly say has never been done before to my knowledge. I wanted to drop hints and make it a “solvable mystery” while keeping it hard to predict. In that regard I feel I have succeeded.

I am writing a more traditional mystery set in Nantucket in the 80’s but since I work full time and have kids… we will see.

Two genetic researchers are brutally slain on a remote beach in the Bahamas. The investigation falls to Dr. Natalie Franklin, the small-town Medical Examiner working her first murder case. She doesn’t mind dealing with dead bodies, but dealing with her boss, the Chief of Police, is another matter entirely. As she struggles to make sense of the bizarre forensic clues, she learns that sometimes the truth is a casualty that no one wants revived. She vows to find answers to explain the evidence that is seemingly impossible to reconcile.

The Keller Corporation is the main employer on the island of St. Angela. When researcher Greg Cooper is hired, he initially thinks he has landed in paradise. After a few days of crunching data, though, he realizes that his dream job is more of a tedious grind than anything else. Out of boredom he begins to poke around and soon suspects that the Keller Corporation is up to something unethical or even sinister. When Greg discovers another dead body, it seems like a horrible accident, and that’s what Dr. Natalie Franklin thinks, too. But it isn’t long before Greg and Natalie are racing to unlock the secret of the Mendelian Protocol before becoming victims themselves.