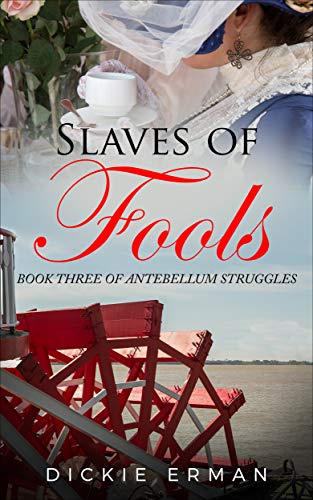 When Collette Winters finds herself a widow with a hotel and a plantation to maintain, she is overwhelmed and at a loss for words. Enter Tolivar: a “trusted” overseer and Mr. Winters’s choice to run his plantation and guard his finances. Mr. Winters might not have made the best decision in selecting Tolivar. Any one of the slaves on the Winters’s plantation could testify to the fact that Tolivar is in everything for himself and only himself. When Tolivar’s purchases begin to mount and Collette fails to see the danger in allowing Tolivar to carry on unchecked, all of their lives take a turn no one could have predicted.

Slaves of Fools is the third book in Dickie Erman’s Antebellum Struggles series. Again, readers are treated to the dramatic dynamic between Trent and Collette Winters. Theirs is a complicated love story born out of the antebellum time period. As with book two, readers find that Trent is unfaithful to Collette who remains by his side and is somehow able to forgive even if she isn’t willing to forget.

I desperately want Trent, a businessman and plantation owner, to be smart, but he misses the mark. His desire to put Tolivar in charge of his trust is clearly a mistake but makes for a nice story line leading to the devastation of characters who begin to fall like so many dominoes as the book progresses. Colette’s love for Trent is really his one saving grace.

It’s difficult to find a character as loathsome as Tolivar. Erman has created a fantastic antagonist in this greedy and vile overseer-turned trustee. I believe I released some audible gasps of frustration and disbelief as Tolivar moved through the Winters’s money with lightning speed. Many villains have at least one redeeming quality–not Tolivar. From the extravagant jewelry purchase to asking the creepy, unwanted doctor to take up residence, Tolivar is as intolerable as he is predictable.

I was disappointed to see that Amana, a beloved character from the second book in the series, did not have as prominent of a role in this one. She is my favorite character and has a heart of gold. Her backstory is classic, and she is proof that perseverance is not easily achieved but is worth every second spent trying to achieve it.

Erman masterfully works humor into his writing. Twice I found myself guessing incorrectly and wondering what tone the book was about to take. Without giving anything away, I can say that I was pleasantly surprised both times at how misleading the author is and how well he uses humor to bring the story back around.

I had a few concerns regarding grammar choices, mechanics, and word choice. In addition, I found myself questioning some of the verbiage used as it didn’t seem to fit the time period. Throughout the book, I struggled to discern the characters’ thoughts from their dialogue. A few tweaks in this area would improve readability quite a bit.

Erman has created an engaging and quick read with relatable characters and protagonists the reader will inevitably cheer for.