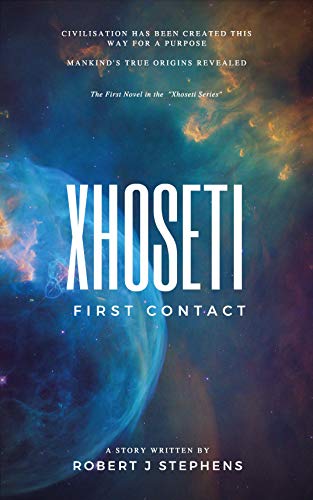 Xhoseti First Contact is an engaging sci-fi thriller about a mission to save human civilization. While the premise sounds somewhat cliched, Robert J Stephens is a masterful storyteller. He weaves together the stories of miners that awaken the horrific Xhoseti, the omniscient Guardians plotting to save the universe with minimal collateral damage, and multiple historic events that defined human civilization. When the Xhoseti are awakened, the Guardians are aware that it is only a matter of time before humanity is under the threat of complete destruction. They enlist the help of Krys Reenberg, leaving him in charge of seven colonies on Earth. He has to ensure that the growth and development of humanity remains unhindered, while at the same time putting out fires throughout history,

Similar to the other books in the Xhoseti series, there are lengthy and fascinating descriptions of technologies. Things like the Morph Suit were elaborately explained; the science and science fiction ideas behind it all laid out. I enjoyed these parts, even if they verged on a bit too lengthy and unrealistic.

Although the characters and story lines are interesting, the dialogue can come across as a bit unnatural at times.  It works for the Xhoseti and Guardians, but the humans, not so much. Same goes for the character introductions. Take for example a description like this one- “Graham had the physical attributes of a twenty five-year-old human male.” Things like these threw me off a little, but these are easy to ignore.

However, the dialogue did have snippets of humor this time, especially with Krys. This was a refreshing aspect, especially since the rest of the book can be dry and serious. I loved the different events in history taking place in real-time, from  Japan to Mexico, and from the spread of Buddhism to Mary in Jerusalem. Krys’ ingenious ideas and debacles were fun to follow.

There were a lot of disturbing scenes, from violent and gory depictions of battle and barbarian human acts. I suppose these are a necessary evil if an accurate reflection of humanity is expected. The book ends on an intense but satisfying note- I look forward to more of the Xhoseti universe. Xhoseti First Contact is a superbly intriguing science ficiton novel.