← Infidelity: A Personal Story
Time Travel is About Contradictions →

A Force of Nature 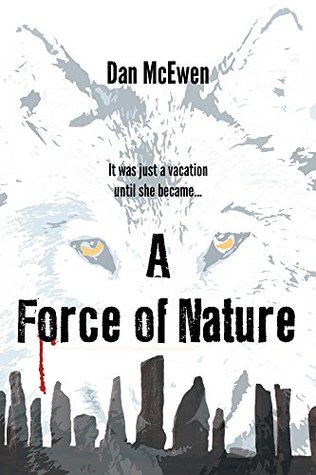 Good books are as hard to find as good help. A Force of Nature by Dan McEwen is set in the 90’s, in Toronto. The book takes you on a journey that begins with writer, Claire ‘Voyant’ Chandler, the protagonist. After setting out to make an admission and vacation with longtime friend and former boss, Iris Saunderson, Claire finds herself entangled in the dark history of Iris’s beau, Victor Redstone. As the writer’s ‘special ability’ begins to unravel old mysteries of disappearing girls, Indian spirits and murder, it also brings to light startling truths about Victor’s past, unexpected romances, death and lost treasure.

Claire Chandler, former writer for Canadian Woman magazine, and script editor turned writer-for-hire, lost both her parents at a very young age and escaped death herself several times, in very uncanny ways. She lost lovers to death, divorce and indisputable job offers and was far from the average thirty-eight year old. In addition to escaping death, she had what seemed to be the gift of insight. A gift that would take her on the vacation she would never forget. Claire’s daily cyclical pedal, run, write, repeat, lifestyle was broken by three encounters of coincidence that pointed in the direction of her former boss and the dreadful secret she left behind. Claire would leave the city and vacation with Iris to confess her secret, but she would not have expected the outpouring of revelations that would follow. During this time, themes of fear and uncertainty were dominant about Claire. As Claire entered Bay Harbor; where Iris lived, the description of the buildings and scenery are very detailed and brought out clearly, the narrative style of the writer. A local officer, Ben Shipley, would however warn Claire to be careful of animals while on the island. Bears were the Redstone family totem, it’s also the animal that has taken the life of Ben’s parents, uncle, nephew and daughter. The generational rivalries between the Shipley’s and the Redstones, local officers and Ojibwe Indians have resurfaced. Iris’ failing health, the discovery of dead bodies, ghost sightings and a mystical wolf, all weighed on Claire’s mind. Local pilot, Tom Katz, would refocus his energies from chasing criminal Lou Scoggins, and would find himself in the middle of dangerous unknowns with Claire and her ghosts. In a closer analysis, Claire and Iris represented a strong feminist perspective throughout the book. The Canadian Woman represented their voice against prejudice ideologies. The theme of prejudice was also evident among the Redstones, as they were isolated because of their nativity. Discovery is another important theme that was displayed; it embodied discovery of facts and discovery of self. In the end, the main underlying theme was that of justice. Each detail of the story was an important element that desperately tried to inform justice. Although it took a while to climax, A Force of Nature is a good read for persons interested in mildly paranormal mysteries.

← Infidelity: A Personal Story
Time Travel is About Contradictions →