← Jealousy is a Nasty Emotion
The Fix Yourself Handbook → 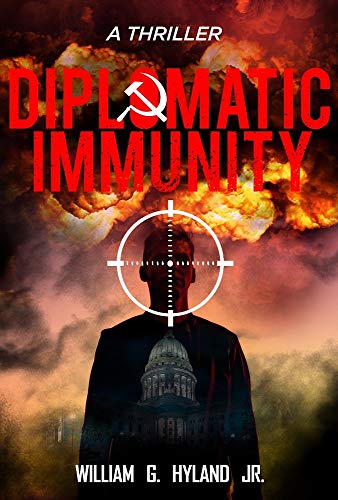 William G. Hyland Jr.’s Diplomatic Immunity gives readers a deep dive into the world of blind political ambition, blackmail, betrayal, murder and senseless violence meted out on an innocent man by a privileged psychopath. It’s a fast-paced action where the protagonist, Nick Gallery, finds himself on the edge of a bottomless abyss of despair after the life of his wife is snuffed out and his daughter put into a comma by, what seems to be, a hit and run accident right before his eyes. Driven by revenge he goes after the antagonist, a former KGB agent and Russian diplomat, Ivan Sergay.

With a well written and intricately woven plot, Hyland brings the characters in his book to life. For instance, I was able to tell what drove the protagonist, Nick Gallery, through the flashbacks he has of his interactions with his father when he was a kid. He is taken through a brutal childhood of parental neglect and disapproval by a father he looked up to. This in turn has pushed him to do things in a clean- and clear-cut manner, as his father had pushed him to during the archery classes, thus becoming a lawyer of great reputation. Later in the novel, this helps him face off with a highly trained FSS agent as equals. In the same fashion, he helps us understand why and how Ivan Sergay, the antagonist, ended up being a sociopath with borderline psychopathic behavior. To my delight, the information which builds these characters and others in the book is delivered in craftily designed flashbacks scattered across the chapters- giving the reader breadcrumbs to follow throughout the novel. The more you read the book the clearer you understand what drives these people.

Hyland gives life to the characters and a sweet taste to the text through well thought out conversations between the characters. When reading through the unspoken thoughts of Nick while he is about to dock the boat at the Gulf of Mexico, the conversation between the waitress and Ivan Sergay when he orders a glass of Chateau Le Pin and the conversation between Detective Frank Landon and Grady, plus Grady’s usage of the Swahili term ‘bwana. This definitely kept me, and will keep any reader, glued up to the very last chapter.

It is easy to tell that Hyland has done his research well. Starting with the medical lingo he has employed at the hospital scene. His definition of the guns is intricate. He ensures that as you get entertained by the fast-paced action in the book, you are also learning something new like KGB stands for Komitet Gosudartvennoi Bezopasnoti. While reading Diplomatic Immunity, I couldn’t help but feel like I was reading one of the works of great authors of renown.

← Jealousy is a Nasty Emotion
The Fix Yourself Handbook →